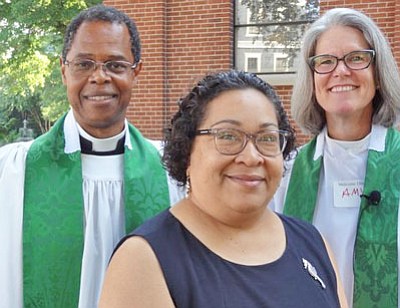 ANNAPOLIS — The Reverend M. Dion Thompson has joined St. Anne’s of Annapolis as the Associate Priest for Pastoral Care.

Reverend Thompson received his M.Div. from The General Theological Seminary of the Episcopal Church in New York City in 2007. He was ordained to the diaconate that same year and to the priesthood in January 2008.

He served for eight and a half years as the rector of the Episcopal Church of the Holy Covenant in Baltimore City and immediately prior to coming to St. Anne’s, he served as interim rector of Grace Memorial Episcopal Church in Darlington, Maryland.

Before becoming a priest, Dion Thompson enjoyed a twenty-year career in journalism, working for The Baltimore Sun, The Miami Herald and The Hartford Courant.

In Hartford, he started as a night police reporter and went on to cover a variety of beats, including the Connecticut state prison system, the neighborhoods of Little Haiti and Liberty City in Miami, and the state legislature in Maryland.

Born in Los Angeles, California, he holds a B.A. in English from California State University, Long Beach and an M.F.A. in Professional Writing and Publishing from the University of Southern California. His novel, “Walk Like A Natural Man,” was published in 2003. Recently, he has written articles for Episcopal publications.

Reverend Thompson is St. Anne’s first African-American clergy member in more than 100 years. In 1886, Reverend Southgate hired The Reverend Joshua Massiah as an assistant to work with what was then the St. Philips mission church of St. Anne’s. He left in 1889.

Reverend Thompson and his wife, Jean, also a former journalist, have been married 31 years and have one son, Tevin. They live in Baltimore.