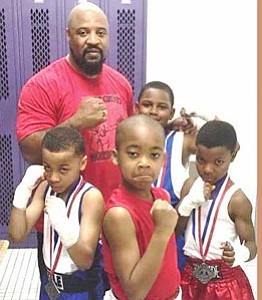 BALTIMORE — On the Northeast side of Baltimore, a youth boxing club is steadily earning a reputation as one of the city’s premier recreation locations for developing young boxers, while serving as a "safe-haven" for at-risk youth.

The 'Time 2 Grind' boxing club is effectively making its mark, according to the boxing club's founder and coach, Mack Allison III, a native Baltimorean.

Although his interest in the "sweet science" started as a youngster before he graduated from Southern High School near Fells Point, Allison and his best friend, Earl Dent, had more of a passion for East Asian martial arts— Karate, Judo, Tae Kwon Do and knife-wielding fighting sports.

Dent is now a member of the Baltimore Police Department.

"We were really into Bruce Lee and people like that," explained Allison.

When the director at the City's Parks and Recreation Department where his wife worked mentioned starting a boxing program for youth, it was suggested that Allison help to get the program off the ground.

Two years ago, his pastor at Transforming Life Baptist Church, (TLC) said he was interested in starting a boxing program within the church. Allison, now 47, immediately started implementing his expertise as a martial artist and designed a gym and purchased required heavy bags, free weights and other equipment needed to create a legitimate boxing environment.

Allison was able to transform a novice, boxing group into a championship-based unit. He is proud that some of his members have attained championship status.

“So far, we have a National Silver Glove champion; and four Junior Olympic State champions. Other fighters have competed on a national and international level and we have a professional boxer that is undefeated with seven wins,” he said with pride.”

"Sure, there are several boxing gyms in Baltimore, but we're the first one born out of a church," said Allison. “It's our goal to keep the children who come here, safe. We want to keep them away from drugs and the fast life,” he said. Maintaining good grades is another priority at the club, he stressed.

Since starting the boxing club in 2015, Allison says things are moving along at a steady pace. The group recently received its 501 (c) 3 non-profit status. The church-gym is located at 4801 Simpple Avenue, Baltimore, Maryland 21206.

He also appreciates the support he receives from his assistant coach, Gary Lewis.

A billboard project is in the works, according to Allison.

"We would like to put positive messages on many of the empty billboards around the city. We need a more positive message on them like, ‘go to school, don't be a fool.’ It's my way of presenting something positive to the kids. A subliminal message that they’ll look up and see on these billboards," said Allison.

"People blame the mayor and politicians for children’s short-falls [but] it’s not their fault— it's the parents who aren't there. The kids are taking care of themselves, so we need a safe-haven for them. It really does take a village to raise these kids. Too often, the kids won't listen to [their] parents, but they'll listen to others— coaches, teachers, mentors, etc.

“Ours is a religious-based boxing program. We train to win, but more so, [it gives] them a place off the streets to enjoy new friendships and camaraderie,” said Allison.

Allison considers his wife, Dawn Allison, as his his rock.

“She’s the one that encouraged me to do what I’m doing,” he said.

The couple has been married 22 years, with three grown children, including a daughter and two sons.

“When my kids were young, I got them very involved in training— including my daughter. It helps build confidence for all young people, especially when peer pressure starts to arise,” he said. ‘Time 2 Grind’ is open to boys and girls and Allison encourages parents to bring their young daughters to the gym. It’s good for all kids.”