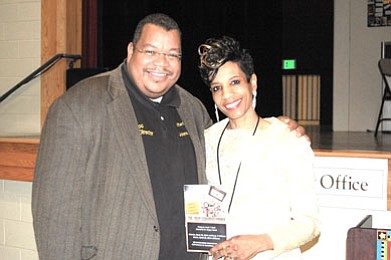 Dr. Gregory Wm. Branch is the Stage Director, while Howard “Buddy” Lakins, Jr. is the Musical Director for the powerful production, which will also include original music composed by Peabody Conservatory student Allen Branch.

“We are excited to present Ursula V. Battle’s Serenity House,” said Dr. Branch, who serves as Executive Director of UV. “Serenity House supports UV’s mission which is to spread hope, health, and healing through harmony. It debuts just in time for the holidays and is a must-see. People can expect to laugh, cry, and most of all, be uplifted.”

The production’s storyline centers around the journey six men and women - who are three months in recovery, take after arriving at the imaginary United in Victory Tabernacle on the Hill Freewill Catholic Baptist and Episcopal Church of God in Christ’s newly opened “Serenity House.” Through ministry, music, an unforgettable story and dance, the production takes a heart-wrenching, yet heart-warming look at the devastating impact that addiction has on society— particularly on families that in some cases, spans generations. The production also highlights the supernatural power of God to help us overcome, and the transformative power of forgiveness.

During its run, there will be post-show panel discussions regarding the work featuring behavioral health experts, the performers, directors and writer.

Battle and Branch’s previous productions include Ursula V. Battle’s My Big Phat Ghetto FABULE$$ Wedding, DisChord in The Choir, and The Teachers’ Lounge. Battle is a journalist and writes for The Baltimore Times, while Dr. Branch serves as the Director of Health and Human Services for Baltimore County and is the Executive Director and Co-Founder of Unified Voices (UV) of Johns Hopkins.