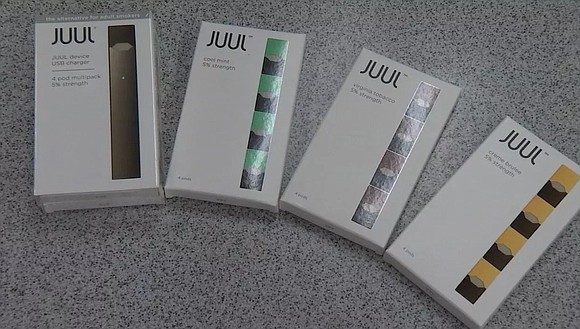 The small vaping devices are becoming a big problem all across the country, and at Sunset High School in Beaverton, parents received an email just this week about what's known as "Juuling." KPTV

A high school principal in Oregon is warning students and families about an e-cigarette that's now popular with a lot of teens called "Juul."

The small vaping devices are becoming a big problem all across the country, and at Sunset High School in Beaverton, parents received an email just this week about what's known as "Juuling."

Principal John Huelskamp wrote in the email, in part, "Juuls are the newest form of vaping and I believe are targeted directly at teens (especially girls). We are seeing them at an increasing rate here at Sunset and they are simple to convert to marijuana oil (THC)."

He went on to say, "Be it the nicotine intensity or the THC, the threat is real and growing."

Huelskamp also included a link to a Boston Globe article about Juuling. The article explains how the specific Juul e-cigarette is sleek, tiny, and has been mistaken for a thumb drive.

FOX 12 spoke with some Sunset High School students who said they are aware of Juuling happening on campus.

"I've been hearing that people are bringing them to school and that it's been a pretty big issue in the bathrooms. I don't know, I feel people are getting really distracted by it," said Sunset High School student Lauren Filer.

In light of the trend and school officials concerns, those students say they've noticed, for example, the entrance doors to the bathrooms used to be closed, but now, they're usually kept open.

"Sometimes you see teachers by the bathrooms, just watching," said Sunset High School student Jillian Jang. "Because teachers have been outside the bathrooms before and caught kids, and they get sent to the principal's office."

Something that makes it challenging for school officials to catch a student using the Juul - it has pods or cartridges with faint, fruity, or sweet flavors.

One student says she first heard others talking about the Juuling trend last year and thinks it became more popular because of social media.

With this weeks email to Sunset High School families, Huelskamp said it was an effort to "make sure all families are aware" of the growing threat that has been "preying on our students."