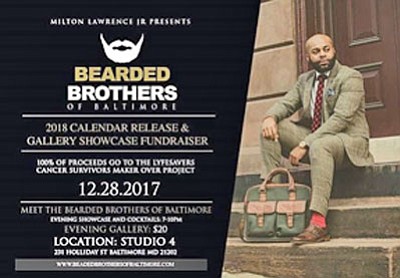 To support The Lyfesavers Project, a 2018 calendar release and gallery showcase fundraiser will be held at 235 Holiday Street in Baltimore City at Studio 4, from 7 p.m. to 10 p.m. on December 28, 2017. To purchase tickets, visit: www.beardedbrothersofbaltimore.com. Courtesy Photo

BALTIMORE — According to “Statistics at a Glance: The Burden of Cancer in the United States” from the National Cancer Institute of the National Institutes of Health, an estimated 1,685,210 new cases of cancer would be diagnosed in the United States, and 595,690 people would die from the disease in 2016. Additionally, the number of people living beyond a cancer diagnosis is expected to rise to almost 19 million by 2024.

Reportedly, the overall cancer death rate has declined and the number of cancer survivors has increased.

When individuals are diagnosed with cancer, some patients may benefit from hearing the stories of survivors who understand the emotional or physical difficulties that they face. 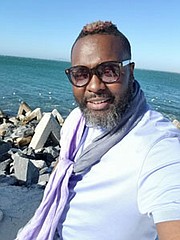 Professional photographer and videographer Milton Lawrence, Jr. of Baltimore is the founder of The Lyfesaver Project

Professional photographer and video-grapher from Baltimore, Milton Lawrence, Jr. is trying to bridge this gap by connecting cancer patients with positive stories, where survival and courage are intertwined.

Lawrence has made a noteworthy career out of documenting and capturing untold stories— in locations near and far— with creativity and detail. Beyond Lawrence’s day-to-day clients, he utilizes his skill set to support cancer patients through his nonprofit organization, “Lyfesavers.”

Through The Lyfesavers Project, he combines photography, video and interviews with makeovers to uplift individuals who have been personally touched by cancer. The overall mission of the nonprofit is to highlight the stories of current cancer survivors in an effort to inspire other cancer sufferers to continue the fight, according to Lawrence.

“The Lyfesavers Project was designed to create makeovers for terminal and stage IV cancer sufferers. The make- overs are for both men and women [but] to date, we’ve only done (makeovers and interviews of) women,” Lawrence said. “Lyfesavers started off as a project for about five years, and now it is an official nonprofit 501(c)(3).”

Lawrence further explained that the stories of cancer survivors are told by utilizing a video “docuseries” style and the features are presented through YouTube and Facebook. A creative team handles hair, makeup and wardrobe, while he photographs the subjects and serves as producer.

Lawrence says that he wants to produce at least one show a month.

To support The Lyfesavers Project, a 2018 calendar release and gallery showcase fundraiser will be held at 235 Holiday Street in Baltimore City at Studio 4, from 7 p.m. to 10 p.m. on December 28, 2017. As a part of the event, Lawrence, a “bearded man” is capitalizing on the facial hair fashion trend by highlighting other men who want to help to do something good in the community.

Stage IV colorectal cancer survivor Trina Taylor explained that she used the Lyfesavers platform to tell her story and to give others hope.

While scrolling through Facebook, Taylor found another survivor’s story featured by Lyfesavers. She wanted to know more about the organization, so she sent a message to Lawrence through Facebook. He replied and was excited about becoming a vessel for her to give life to her cancer story through photography and videography. She felt empowered and renewed, in addition to gaining some peace from sharing her story.

“Lfyesavers afforded me an opportunity to be a voice for others having a hard time keeping their faith and hope. The circulation on social media of my Lyfesaver's video exposed me to numerous opportunities, such as speaking engagements, photo shoots, magazine articles, panel discussions and the list goes on,” Taylor said. “The Lyfesavers beauty makeover and photo shoot reinvented my spirit [and helped] me feel whole again. I finally was able to show the world my ‘new normal’— living with cancer. It was so much more than a photo shoot— it was a new beginning.”

To learn more about the upcoming fundraiser featuring the Bearded Brothers of Baltimore, or to purchase tickets, visit: www.beardedbrothersofbaltimore.com.