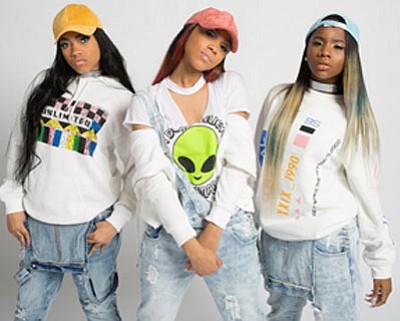 (Left to right) A’laiza Hebron, aka “Lay; Kiya Hawthorne, aka “Ki,” and Marshaye Hebron, aka “Shay,” came together to form the group known as “Riplay.” Def Jam Records signed the Baltimore R&B Pop girl group who received extensive training and preparation under the tutelage of executives from Phantom Boyz Records in New York. The trio is on a tour of schools in Baltimore, Virginia and Washington to help encourage other young individuals about the dangers of bullying and the importance of building self-esteem Courtesy Photo

BALTIMORE — They are young sisters from Baltimore with a very mature and universal message. Marshaye Hebron, aka “Shay,” younger sister A’laiza Hebron, aka “Lay,” and Kiya Hawthorne, aka “Ki,” who are between the age of 15 and 17, have joined together to form the music group, “Riplay.”

The trio is on a tour of schools in Baltimore, Virginia and Washington to help encourage other young individuals about the dangers of bullying and the importance of building self-esteem.

Shay, Lay and Ki also are Def Jam Records newest artists, having signed with the legendary label this year after extensive training and preparation under the tutelage of executives from Phantom Boyz Records in New York.

R&B girl group, Riplay from Baltimore has been lauded by Baltimore Mayor Catherine Pugh for their Anti-Bullying and Self-Esteem campaign with a special certificate for their work. (Left to right) Lay, Ki and Shay.

Their new single, “STATUS,” has been among the most downloaded songs this year, underscoring the unique talent that’s allowed them to quickly rise in the ultra-competitive music business.

“Things are going really great and we’re enjoying every bit of this,” said Lay, who noted she is inspired by Erykah Badu and Beyoncé. “I think it’s great for other young girls to see how far we’ve come especially now that we’ve signed with Def Jam because they can see that, if we can make it from Baltimore, they can too.”

Ki, who says sheis inspired by the late Whitney Houston and singer Kehlani, noted that their music contains messages of inspiration for others.

“We want to help people. There’s a lot of bullying going on and it’s a lot that people still need to know,” Ki said. “There’s still a lot of people who don’t want to be alive because of bullying and because of being picked on and a lot of our songs are about what we’ve been through and we want people to know that we also have gone through things and still go through stuff so they can relate to us.”

Reviewers have already chimed in.

Some say that Shay brings a style of hip hop to the group that reflects one of her idols the late Lisa “Left Eye” Lopez while Lay brings a soft soothing sound that sets the tone for the group and with her funky image she makes a bold statement.

Ki is known by the group to bring the soul in the power behind the sound. As a group, Riplay aims to recreate the blueprint of some of the girl groups before them that they mirror such as and TLC and SWV, said another reviewer.

“Their charming rapport is hard to miss, and the result is a nostalgic, radio-friendly sound that’s a winning balance of sweet and street,” a music expert at SKOPE Magazine wrote. “They’ve had no problem finding an audience, either, with their videos racking up millions of views online.”

Riplay was discovered by Ivory of Low Key Music Group and he brought the group to Melvin “Official” Watson, CEO and founder of Phantom Boyz Music.

Baltimore Mayor Catherine Pugh has even lauded the group’s Anti-Bullying and Self-Esteem campaign, awarding them a special certificate for their work.

The group has also been featured in various urban magazines and on television in Washington.

“We started off practicing and just writing songs, and we kept writing and kept practicing and Phantom Boyz worked with us to help develop us and brought us to Def Jam and now we’re just excited to be doing this together,” Lay said.

The group also promised to “keep it real” and not stray from their anti-bullying and self-esteem message.

“It’s so important because we can relate,” Ki said. “It’s also important that our message to women who might look for the attention of men as a way of validation is that we just want them to know that it’s important that they love themselves first.”