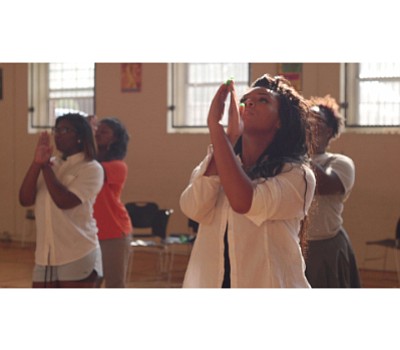 In a scene from the documentary film "Step," members of a dance team practice at the Baltimore Leadership School for Young Women. Courtesy Naysa Reames Courtesy Photo

In 2008, filmmaker Brenda Brown Rever, in partnership with Baltimore City Public Schools, blazed the trail to transform secondary school education in the city.

Having worked closely with district leadership to form the first all-girls middle and high school in Baltimore, Rever planned and diligently rounded up a circle of friends, supporters and champions of the city to create a school that would focus on leadership, college preparation, strong academics and best practices for girls and young women--over the course of a little more than one year.

By 2009, the Baltimore Leadership School for Young Women (BLSYW), then housed in a temporary facility, opened its doors to its first and founding class of 120, sixth grade students.

The first graduating class, which graduated only six months ago, boasts of SAT scores more than 200 points above the Baltimore City average and every student earned college acceptances. And, as if things couldn’t get any better for the young institution of learning, Fox Searchlight Pictures has paid more than $4 million at the Sundance Film Festival for world rights to STEP, a documentary about a step dance team at the school.

Fox Searchlight bought both distribution and remake rights for the Amanda Lipitz-directed film.

A major focus in the film is the school’s mandate to send every student to college, despite the barriers that their home lives and community might present.

With the help of financial backing from the Baltimore Ravens, STEP follows three seniors and their Lethal Ladies step dance team as they navigate a nerve-wracking college application process and the trials and tribulations of the tenacious young women, as well as their mothers, an unstoppable college counselor, and a no-nonsense step coach.

“We hope that the heroes of STEP will inspire girls everywhere to do what they have done, which is to prove that nothing is impossible when you surround yourself with a group of powerful women,” Lipitz said in a press release.

STEP also offers viewers a rare and personal glimpse into the dreams and lives of a set of students and families who founded the Baltimore Leadership School for Young Woman to cultivate future leaders in the city and beyond.

The Lethal Ladies step dance program is one of several vehicles students choose to find and channel their passion, power and purpose.

“STEP is not just a film. It has become a labor of love for our entire community,” school officials and film producers said in a statement.

“Every person who came into contact with our students and school community in the making of this documentary became a friend of the school – fully committed to our girls, to our mission and to portraying a journey of laughs, tears, stumbles, hard knocks and kinship, and all to a contagious beat that is authentically young and haunting and universal,” the statement said.

The film reveals up-close what can happen when young women have the independence, discipline and safety net to lead, be challenged and create a legacy for others.

Every day at BLSYW, the focus is on students and alumnae, and on nurturing a learning community of high expectations and support for every BLSYW girl as she creates the steps she will take toward her future, officials said.

Of the class of 2016, 98 percent graduated and received a high school diploma and each graduate earned acceptance to John Hopkins, NYU, the University of Maryland, Hampton University, Coppin State, Potomac State and Rosemont College, officials said.

Also, each student in this year’s class participated in pre-college summer programs as rising seniors.

“These outcomes only partially convey the journey of an enduring commitment to our students, a steadfast fidelity to mission and our resilience as we grew from an idea and a school of one grade to a full college preparatory middle and high school with an annual commencement,” Dr. Shanaysha M. Sauls, the school’s CEO said in a statement.

“And along the way, we built a vibrant and special community that is like none."