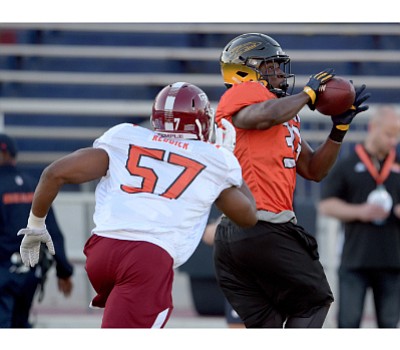 Losing Zach Orr will be a tough task for the Baltimore Ravens to overcome. Orr retired recently after suffering a congenital neck/spine condition that ended his season.

Losing Zach Orr will be a tough task for the Baltimore Ravens to overcome. Orr retired recently after suffering a congenital neck/spine condition that ended his season.

“It wasn’t a quick decision. It definitely was not easy," Orr said during his retirement press conference. "As a football player, we definitely know the risks that are at hand, but if you love the game and you are a fan of the game and you love it, then you are going to play. That is what makes this sport great."

The 2016 season was his first as a starter. He played inside linebacker alongside C.J. Mosely. While Mosely was selected to the Pro Bowl, Orr was named second-team All-Pro. He posted 132 tackles, five passes breakups, three interceptions, and a forced fumble.

So now that Orr is not in the future plans, how can the Ravens go about replacing the outstanding linebacker? One of the best options was on display last week during the Senior Bowl.

Temple linebacker Haasan Reddick made his presence known in Mobile during Senior Bowl week. Reddick converted from defensive end to inside linebacker and made the transition smoothly.

He was at his best when rushing the passer, especially during pass protection drills. Reddick also showed the ability to run with bigger receivers and tight ends. The Ravens will need a playmaker at weakside linebacker which should fall right in line with what Orr was able to accomplish.

There are some who feel the former Temple player could be selected in the first round. The Ravens hold the No.16 overall pick which may be a bit high for selecting Reddick. However, he would be a value pick if he is on the board when Baltimore picks in the second round (No.48 overall).

Reddick came to Temple as a running back/safety and converted to defensive end after playing mostly on special teams as a freshman and sophomore. Special teams is a path by which most Ravens defensive players take to a starting role.

Orr is a prime example of how a lot of the players have to cut their teeth on special teams prior to taking over a starting position on the defense.

The Ravens like to draft tough players that love football. Ozzie Newsome, Eric DeCosta and John Harbaugh have already seen how tough 2017 third-round pick Tayvon Young was when he came to Baltimore from Temple.

Like Young, Reddick wore a single digit number in college. Temple awards single digits to the toughest players on the team as voted on by the players.

As for the physical comparisons, Reddick stands at 6-foot-1, 230 pounds while Orr is 6-foot-0, 225 pounds. The two players are very similar. Reddick generated a buzz while at the Senior Bowl.

The Ravens have drafted 27 players that have played in the Senior Bowl since 2010. That is more than any other team in the league. It would be no coincidence if that number increases in 2017, with Reddick being one of their early selections.