Tax season is back, Cash Campaign is back 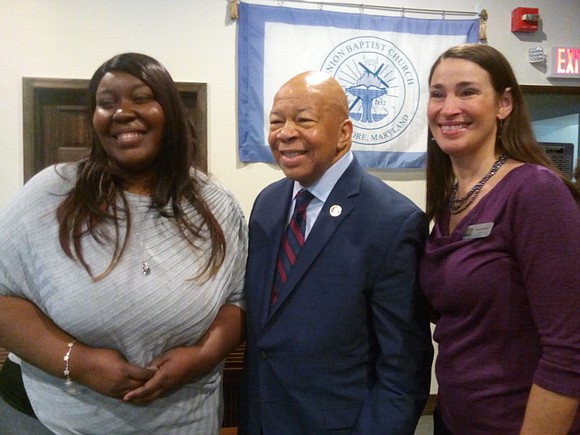 Congressmen Elijah Cummings and John Sarbanes, Maryland Comptroller Peter Franchot, Mayor Pugh’s Chief of staff Tisha Edwards, and City Council President Bernard C. “Jack” Young joined Baltimore CASH Campaign’s Sara Johnson to celebrate Earned Income Tax Credit (EITC) Awareness Day. The celebration was put on last week to kick off the tax filing season and to remind thousands of working Marylanders to use the EITC, and other tax credits for which they may be eligible as well as free tax resources.

Even Internal Revenue Services (IRS) Commissioner John Kosekinen made an appearance to appeal to more Marylanders to use the EITC.

“The Earned Income Tax Credit is an extremely important anti-poverty tax credit that helps millions of people every year. But many people Maryland and across the country, overlook this credit and the support it can provide to them and their families,” Kosekinen said.

“It [accumulating savings] changed my life. I could focus on things I had never focused on before. With all the savings, I kept, in November of 2016, I became a homeowner,” Bradley proclaimed as the audience loudly applauded her determination.

Congressman Elijah Cummings affirmed the transformation the Baltimore City CASH program can make in the lives of average, every day Americans like Bradley.

“I’ll bet you April has told at least 30 or 40 people about this program,” Cummings said, congratulating Bradley on her success.

“What the CASH campaign has done for April has changed the trajectory of her destiny. Because it has volunteers who care. What it does is increase the expectations of people’s lives.”

The Baltimore CASH Campaign’s CASH COACH Program matches individuals and couples with a financial coach to help them reach their personal goals. April worked with her coach to save money bit by bit until she cashed in her “bonds” for a down payment on a house.

The Earned Income Tax Credit (EITC) is a program provides tax relief for American workers with low-paying jobs. To claim the EITC, individuals must have earned income in 2016. Generally, this means actual wages, salaries, tips or self-employment income. Other earned income sources include long-term disability benefits (below the minimum retirement age) and union strike benefits. Unemployment benefits such as alimony, child support, interest/dividends, and social security benefits do not count as earned income. Non-taxable combat pay may be classified either way. Potential recipients must have a valid Social Security number, be a U.S. citizen or resident alien, and cannot be claimed as a qualifying child of another taxpayer.

For additional information about the Baltimore CASH campaign, and for a list of free tax preparation sites in Baltimore City and Baltimore County visit: www.bmorefreetaxes.org or call: 410-234-8008.