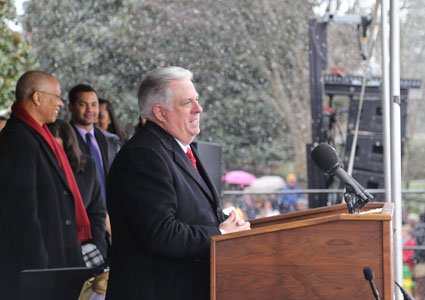 Republican Larry Hogan Jr., took the oath of office on Wednesday, January 21, 2015 as Maryland’s 62nd governor. Boyd Rutherford, who ran alongside Hogan for lieutenant governor, also took the oath of office, becoming just the third African-American to hold that position in the state. Reportedly, Hogan and Rutherford will inherit a $750 million deficit and the governor says that he will focus on making a government that works for everyone. He also said he will be guided by four principals, including: fiscal responsibility, economic growth, reform and fairness. (Courtesy Photo/Office of the Governor)

“I am confident that Bilal Ali is prepared to be a strong advocate for his constituents in Baltimore City in his new role as a state delegate,” said Governor Hogan. “I offer him my sincere congratulations and look forward to having the opportunity to work with him this session to change Maryland for the better.”

Delegate Ali was sworn into the House of Delegates this morning.