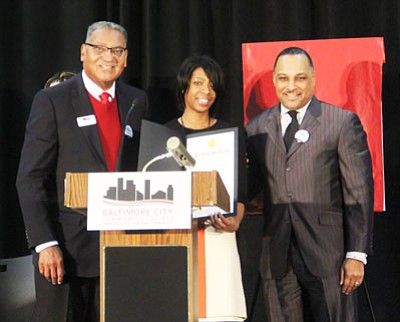 BALTIMORE — Baltimore City Community College (BCCC) celebrated its 70th anniversary this past week with gala festivities at the Liberty Heights campus. The room full of students, faculty, staff alumni and community supporters who gathered to commemorate the college agreed that in the face of a constantly changing city, BCCC has remained constant in serving Baltimore and its communities.

Akiliah Radford, a current BCCC student and mistress of ceremonies echoed the sentiments of many students in the room who expressed gratitude for BCCC’s presence in their lives at a time when they were searching for a place to actualize their futures.

“BCCC came into my life by divine intervention,” said Radford, who mentioned that BCCC gave her a firm foundation and has prepared her well for her next steps in academicly, and in life.

Edward Ennels, mathematics professor and president of the faculty senate urged BCCC supporters to remember the past, but to also look expectantly toward the future where he imagines the campus taking a major leadership role in revitalizing the city.

“I see BCCC as a premier urban institution,” Ennels said. “Let’s not just celebrate the past but envision a glorious future.”

Several public officials presented citations to college officials for BCCC’s service to Baltimore, including Kevin Craft, administrative director of the Governor’s Commission on African Affairs and The Governor’s Commission of Middle Eastern American Affairs; representatives from U.S. Senator Chris Van Hollen’s Office and represtatives from the Office of the Mayor of Baltimore City.

“Baltimore City Community College has consistently stood out as an important institution for many Baltimore residents seeking higher education. BCCC has had many names, but has always included the word 'community,’ ” Craft said. “While community means different things to different people, at BCCC it means a place where anyone can come to work toward their future goals.”

As the college prepares to serve another generation, Craft’s reflections about the meaning of community at BCCC seems to ring true.

After surviving a turbulent period in the early years of the current decade when state funding was temporarily withheld by the Maryland General Assembly while the institution’s programs were scrutinized. Several of the institution’s trustees were also replaced by then Governor Martin O’Mally and the new board subsequently removed former President Carolane Williams.

Current President Gordon F. May, has brought stability to the institution since his arrival in September 2014. He has strengthened the academic offerings of the college and created a haven of support for West Baltimore at the Liberty Heights campus in the aftermath of the unrest in Spring 2015. Most recently, BCCC has partnered with Baltimore City Public Schools to explore options to support the transfer of Renaissance Academy to BCCC’s main campus.

“Students, faculty, staff alumni and our incredible community partners have all pulled together to support BCCC,” said May. “We are here for Baltimore and the state of Maryland, and look forward to being a leader in creating a bright future for our city and state.”