Where we stand now: E-cigarettes 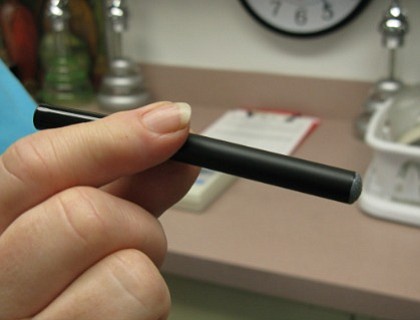 A growing number of studies illustrate the dangers of e-cigarette use by adolescents, claiming they can serve as a gateway for future tobacco use by our nation's youth. Paul Courson/CNN

(CNN) — A growing number of studies illustrate the dangers of e-cigarette use by adolescents, claiming they can serve as a gateway for future tobacco use by our nation's youth.

The latest research on the subject, published in Pediatrics, says e-cigarette use by teens during 2014 was on the rise, mostly fueled by kid-pleasing fruit and candy flavors such as "candy crush, gummy bear and bubble gum". The study showed the teens using these flavored versions were less likely to see tobacco smoking as dangerous, and therefore more likely to take up cigarette smoking. Quoting Department of Health and Human Services data, the study also said an estimated 5.6 million youth could die early from cigarette smoking--related illness unless youth smoking rates drop dramatically.

The Food and Drug Administration recently announced that it will regulate all tobacco products, including e-cigarettes, cigars, hookah tobacco and pipe tobacco, and will prohibit the sale to youths under the age of 18. But the regulations stopped short of regulating flavorings, which some say can help adults who are trying to kick their smoking habit. Critics say that leaves these alluring flavors on the market to entice kids to try e-cigarettes.

The FDA recently cracked down on e-cigarette retailers, sending warning letters to 55 marketers who were continuing to sell e-cigarettes, hookah tobacco and other tobacco products to minors.

E-cigarettes work by heating a pure liquid called e-juice -- composed of flavorings, propylene glycol, glycerin and often nicotine -- until it vaporizes. The resulting vapor is much less offensive to many -- both smokers and non-smokers -- and some studies have shown that it helps smokers quit. In fact, many e-cigarette users don't call themselves smokers, preferring to use the term "vapers" instead.

Despite research showing a danger to adolescents, there remains a controversy over long term impact of e-cigarettes and how they should be regulated. Are they really an effective way to quit smoking? Does "vaping" introduce health issues all its own, unrelated to tobacco? Science and public policy have bounced back and forth for over a decade, as different studies produce different -- and sometimes contradictory -- results. Let's take a look at the debate over the years:

Three pack-a-day smoker Hon Lik, a 52-year-old Beijing pharmacist, creates the first successful electronic cigarette after his father, another heavy smoker, dies of lung cancer. By 2007, e-cigarettes are marketed in Europe and the United States by the manufacturer Ruyan as a way to safely stop smoking tobacco.

Hon is not the first person on record to have the idea for an electronic non-tobacco option. Herbert A. Gilbert filed for a patent in 1963, in an era when tobacco smoking was widely accepted and the health risks were less apparent.

In September 2008, the World Health Organization announces that marketers should immediately remove any claims that e-cigs are a "safe and effective smoking cessation aid" because there is "no scientific evidence to confirm the product's safety and efficacy."