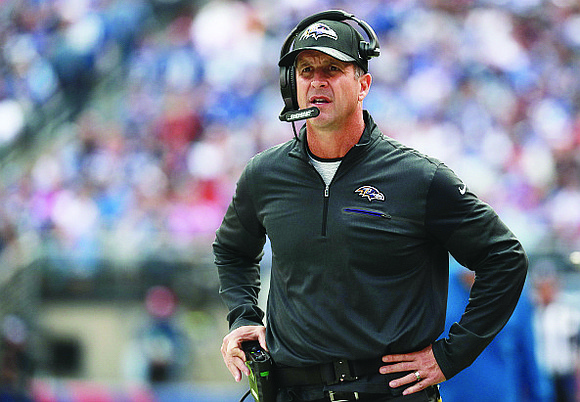 Baltimore Ravens head coach John Harbaugh's assistant coaches have constantly been chosen for promotions by other teams. This is a testament to Harbaugh, who is quietly one of the best coaches in the NFL. He knows how to surround himself with good coaches. Courtesy NFL

Baltimore Ravens head coach John Harbaugh's assistant coaches have constantly been chosen for promotions by other teams. This is a testament to Harbaugh, who is quietly one of the best

coaches in the NFL. He knows how to surround himself with good coaches.

Leslie Frazier only spent a year in Baltimore as a defensive backs coach before he got a promotion elsewhere. Frazier recently joined the Buffalo Bills staff as the defensive coordinator for new head coach Sean McDermott.

Chris Hewitt, a Ravens’ assistant since 2012, will coach the secondary in 2017 after Frazier's departure.

A number of Harbaugh's offensive coordinators have gone on to find success elsewhere. Jim Caldwell is currently the head coach of the Detroit Lions.

Despite the loss of future Hall of Fame wide receiver Calvin Johnson, Caldwell led the Lions to a playoff appearance last season.

Gary Kubiak spent one season with Harbaugh in Baltimore. He guided a Ravens offense, which gained the most yards in franchise history in 2014.

Kubiak returned to the Denver Broncos, a team that he once played for. He also served as an assistant coach for the Broncos when they won two Super

As the head coach of the Broncos, Kubiak led them to a Super Bowl win over the Carolina Panthers in 2015.

Harbaugh is not afraid to surround himself with assistant coaches who are head coach material.

Current Ravens offensive coordinator Marty Mornhinweg is a former head coach, having served in the role for the Lions in 2001 and 2002.

The Ravens recently brought in Greg Roman to be an offensive assistant and tight ends coach. Roman served as an

offensive coordinator for the San Francisco 49ers and Buffalo Bills prior to joining the Ravens.

While in San Francisco, he was considered to be a candidate for multiple head coaching jobs that opened up. Harbaugh Is excited about bringing Roman into the fold.

"We're pleased that he has decided to join the Ravens," Harbaugh said in a team released statement. "I've known Greg for a long time, and he's a hard worker and very creative. Our football

Mornhinweg is equally excited despite the fact that Roman's past experience could make him expendable if the offense isn't successful.

“Getting a veteran coach like Greg Roman to join our staff is a coup for the Ravens," Mornhinweg said when the team announced that Roman was hired. "He is a very sound coach and a good

team player who will help us build our offense."

Offensively, there will be many cooks in the Raven's kitchen in the 2017 season. The task at hand will be to see if they can deliver an offense able to withstand the loss of veteran Steve Smith Sr. and find a way to be more effective running the ball