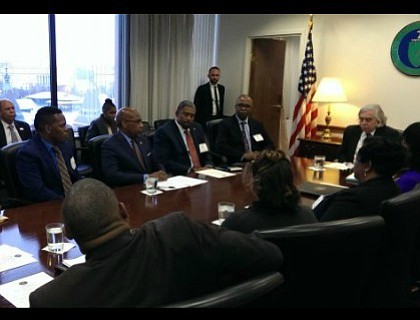 As part of an initiative to promote renewable energy and transformative economic development for communities nationwide, Morgan State University has joined a coalition of Historically Black Colleges and Universities (HBCUs) in signing an agreement with the United States Department of Energy (DOE). Morgan State University

As part of an initiative to promote renewable energy and transformative economic development for communities nationwide, Morgan State University has joined a coalition of Historically Black Colleges and Universities (HBCUs) in signing an agreement with the United States Department of Energy (DOE). The agreement, which launches a new partnership known as the “HBCU Clean Energy Consortium,” will help advance HBCU-led measures in the innovation economy, expand the number of graduates working in STEM fields and bring alternative energy sources to communities in need. Former Secretary of Energy Ernest Moniz presided over the signing ceremony for the agreement, which was held on Jan. 17, 2017, at DOE headquarters in Washington, D.C.

“Bringing more young people into the STEM talent pipeline will help ensure that the United States remains a global leader in clean energy technologies,” said Deputy Secretary of Energy Elizabeth Sherwood-Randall. “Our partnerships with minority-serving institutions like HBCUs are promising opportunities to build career pathways for underrepresented communities and diversify and strengthen the future energy workforce.”

As the nation transitions to a clean energy economy, HBCUs are playing a significant role in leading the transformation in the communities where they are located. Many of these same HBCUs have already begun initiatives that promote sustainability and a green environment on their campuses. HBCUs also play an influential role in driving greater awareness of energy efficiency and solar and renewable energies in the communities around them. Ultimately, the HBCU Clean Energy Consortium will provide a bigger platform for the DOE to engage HBCUs as key stakeholders in nationwide renewable energy initiatives.

“We envision Morgan State University alongside our community partners in the Morgan Community Mile initiative as a model for socially conscious and sustainable economic development,” said Morgan President David Wilson.

“This coalition opens the door for an era of cooperation among the HBCUs and the Department of Energy for research collaborations, student internships and technology commercialization for our communities,” said Victor McCrary, vice president for research and economic development at Morgan State University.

With a signed memorandum of understanding in place, the HBCUs involved in this effort will request funding from the DOE to lead initiatives in three key regions of the country — the Southeast, Southwest and Northeast. As a model for community engagement around these initiatives, the Consortium will adopt the best practices of the Morgan Community Mile Solar Initiative at Morgan State University, which was created to engage the entire community more deeply in energy initiatives.

Morgan State University, founded in 1867, is a Carnegie-classified Doctoral Research Institution offering more than 70 academic programs leading to bachelor’s degrees as well as programs at the master’s and doctoral levels. As Maryland’s premier public urban research university, Morgan serves a multiethnic and multiracial student body and seeks to ensure that the doors of higher education are opened as wide as possible to as many as possible. More information about the university is available atwww.morgan.edu.