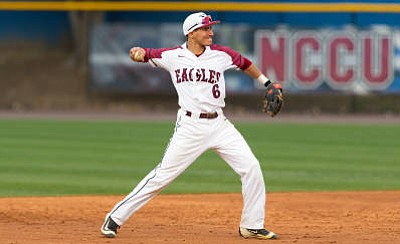 DURHAM, N.C. – North Carolina Central kept the game close with Duke through the first seven frames, but the Blue Devils struck for 12 runs in the last two innings for a 14-6 win at the Durham Athletic Park on Tuesday.

Duke (1-4) opened the game with a leadoff home run from Jimmy Herron (Harleysville, Pa.) but that would be the only run Landon Fraley (Albemarle, N.C.) would give up as he pitched six strong innings with five hits and four strikeouts.

NCCU (2-2) got on the board to tie the game in the third after Corey Joyce (Lexington, N.C.) continued his strong start to the season with an RBI single. The game remained locked at one until the seventh inning after the Blue Devils played a little small ball by advancing runners on a sacrifice bunt before an RBI groundout from Chris Dutra (New Rochelle, N.Y.) put Duke ahead to stay.

The Duke bats broke the game open in the eighth and ninth innings as the Blue Devils collected 12 runs on 12 hits in the final two frames.

NCCU also had some late runs of its own, with another RBI single from Joyce and Carlos Ortiz (Cleveland, Ohio) also drove in a run on a single. The biggest strike in the game for the Eagles came from Dominic Cuevas (Gurnee, Ill.) who hooked a three-run shot down the left field line in the bottom of the ninth.

Joyce finished the game 2-for-5 with two RBI, and Cuevas touched home three times and drew a walk along with his three RBI.

Griffin Conine (Weston, Fla.) had the hottest bat for Duke, as he went 4-for-6 with four RBI and two runs scored.