‘The Obama Years: The Power of Words’ screened at Reginald F. Lewis Museum 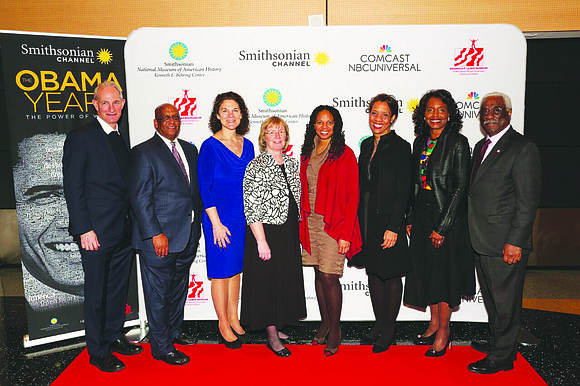 Comcast, Smithsonian Channel and the Reginald F. Lewis Museum of Maryland African American History & Culture partnered to present a private screening of “The Obama Years: The Power of Words” on February 9, 2017. Courtesy Photo

Former U.S. President Barack Obama was known as the nation's “Commander In Chief,” but his extensive involvement in the creation of his speeches is deserving of another title “Writer In Chief.” In celebration of Black History Month, Smithsonian Channel will air a documentary that will take viewers inside the defining moments of his political career through the prism of his most memorable speeches. The film, “The Obama Years: The Power of Words,” provides a rare glimpse into the creation of the speeches delivered by the the gifted orator.

On February 9, 2017, Comcast, Smithsonian Channel and the Reginald F.Lewis Museum of Maryland African American History & Culture partnered to present a private screening of the film, which premieres on Monday, February 27, 2017 at 8 p.m.

“The screening was a tremendous success," said Brad Palazzo, director of External Affairs for Comcast’s Beltway Region. “We were honored to do the private screening, and the film was well received.Attendees learned about Barack Obama's speech writing capability and his ability to deliver them. They were enlightened to learn how involved he was in the writing of his speeches.”

“The Obama Years: The Power of Words,” is narrated by Jesse Williams, star of the hit series Grey’s Anatomy. The program also features insights from eminent historians Doris Kearns Goodwin

“He would edit and pull out paragraphs to make sure the words of his speeches were the words he wanted to deliver, said Palazzo. “He had speechwriters, but was very involved in the process. The film is very impressive.”

“It was a nice panel discussion and timely, given the current political climate and a new president,” said Palazzo. “People who attended the screening really enjoyed the interaction, and the

two-way discussion with the panel.”

He added, “Comcast is committed to the community and to diversity. We love to partner with others who share this vison. We were happy to partner with Smithsonian Channel to bring this wonderful content to the masses.”