What African-Americans Need to Know about ALS 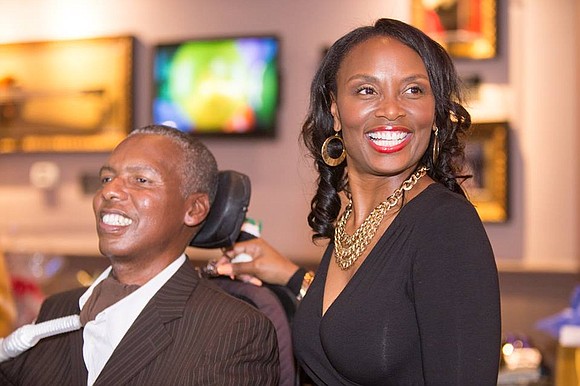 O.J. and Chanda Brigance recently visited the NIH to tour the Laboratory of Neurogenetics. Courtesy Photo

The Brigance Brigade Foundation, a Maryland-based nonprofit, has teamed up with the National Institutes of Health ALS Research Lab to expand research on the racial and ethnic differences across ALS cases.

Classified as an orphan disease occurring in a small portion of the population and commonly known as Lou Gehrig’s disease, amyotrophic lateral sclerosis (ALS) is a progressive neurodegenerative disease that affects nerve cells in the brain and spinal cord.

Officials at the ALS Association note the three words that describe ALS— amyotrophic,” which refers to muscle and nourishment— when a muscle has no nourishment, it atrophies or wastes

away. Further, “lateral” identifies the area in an individual’s spinal cord where portions of the nerve cells that signal and control the muscles are located. As the area degenerates, it leads to scarring and hardening or “sclerosis,” in the region.

Despite the over-sampling for minority populations with ALS, the percentage of African-American cases reported is not proportionate to the population.

“ALS is not spoken about in the African-American community because there are not a lot of African-Americans who are diagnosed with ALS,” said O.J. Brigance, who spent a decade fighting

the disease and as an activist on behalf of families with ALS.

The National ALS Registry gathered data from October 19, 2010 to December 31, 2011 and found that 12,187 individuals were living with ALS, which is more common among whites, males,

The study revealed that white men and women were twice as likely to have ALS than black men and women; and males had a higher rate than females across all races with four in 100,000

ever being diagnosed with ALS.

“In 2007, one of the first symptoms I experienced was a loss of strength in my right arm. I was playing racquetball and noticed I didn’t have the same power in my swing,” Brigance said. “I also started having twitching in my muscles, which I later learned were called fasciculations. I didn’t have any family history of ALS. I am what they call a sporadic case, which accounts for 95percent of cases.

“There are also familial cases of ALS, which account for the remaining five percent of cases,” Brigance said, noting that ALS is a disease that is diagnosed by process of elimination.

Brigance and his wife, Chanda, started the Brigance Brigade foundation in 2008 to help with the expenses not covered by insurance, but are critical to everyday quality of life.

While other organizations raise money for research, Brigance says they didn’t notice any that focused on patient services.

“We were seeing these medical bills roll in and wondered how families pay for this. That was the impetus for us starting the Brigance Brigade,” he said. “I am not saying raising money for research is not important. However, we also need to help those living with ALS right now.”

ALS has been shown to have a genetic basis and finding genes that cause ALS will help scientists learn how to treat it, yet African-Americans don’t often volunteer for genetic research studies, Brigance said.

Without African-American DNA in research studies, it’s unclear how blacks contract ALS, a fact that has the potential to leave the community out of the equation when effective treatments for the diseases are developed, he said.

This also hinders scientists from learning everything about the disease regardless of ethnicity.

The NIH needs comprehensive information about DNA from all backgrounds to know more precisely how the disease works so the foundation and the NIH are seeking to increase in enrollment in research studies.

“I would tell anyone diagnosed that even though they have been diagnosed with ALS, it doesn’t have to be a death sentence. Will there be changes and lifestyle adjustments? Yes, but living lifestyle still possible,” Brigance said.

“I’m not saying living with ALS is easy by any stretch of the imagination. Quite the opposite, it will test every fiber of your being.

“However, I also believe that those who walk this journey with ALS have a certain intestinal fortitude and fight to accomplish whatever they put their minds to. Life has a way of preparing us

for every trial through previous life experiences.”

For more information or to contribute, visit www.brigancebrigade.org/