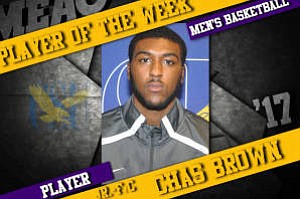 Brown led Coppin State to its third win in four games after recording his third consecutive game with 12 rebounds and scored 19 points for his third double-double of the season. He tied a season-best in rebounds and marked season-highs in both blocks with four and field goals made with nine. The 6-8 junior from Baltimore shot 75 percent from the field and was the MEAC’s top shot blocker last week along with the league’s second-leading rebounder.

Williams averaged 20 points, 5.5 rebounds and 1.5 blocks for the Bison last week. The freshman from Richmond, Va. native scored 28 points with five rebounds on the road at Norfolk State and had 12 points, six boards and two blocks versus North Carolina Central. This marks the seventh time Williams has captured rookie of the week honors this season.

Benton retains the MEAC’s Defensive Player of the Week honor for the second consecutive week and the third time this season. The Long Beach, Calif. native averaged 11 rebounds in two games last week while also registering a total of four blocks. Benton had nine rebounds and a steal at Howard and followed the performance up with 13 rebounds and four blocks versus Bethune-Cookman.

Phillip Carr (MSU) averaged a double-double of 17 points and 11 rebounds in wins over Delaware State and Hampton.

Jonathan Wade (NSU) posted his sixth double-double in seven games, with 16 points and 11 rebounds, in the win over Howard.

Patrick Cole (NCCU) finished with 30 points, 16 rebounds, 12 assists and one steal in wins over Howard and Bethune-Cookman.

Casey Wells (SSU) set a new school Division I record for three-point field goals made with 10 in the win over North Carolina A&T State.