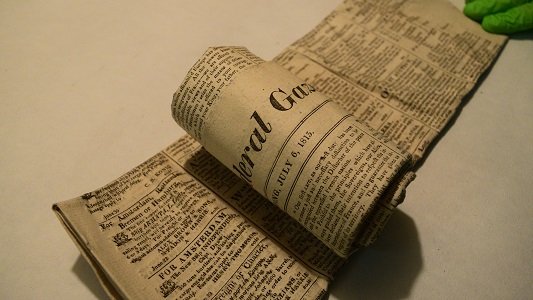 No Twitter for the citizenry of the 19th century--they got their news from newspapers, which they thought people from future generations might wish to read. This was found in the Baltimore time capsule from 1815 Jar No. 3. (Photo: Mount Vernon Place Conservancy)

But young conservatives listening to those same speeches have a more nuanced -- even sympathetic -- view.

Some even admitted they got their news from the sources the White House regularly maligns.

"I know Trump says 'the failing New York Times,' but they're credible," said Cody Leach, a student at the University of Alabama who sported the ubiquitous Make America Great Again cap and a tie autographed by Fox News host Sean Hannity.

Conversations with a dozen students who attended this week's conference revealed the breadth of their news consumption. While many spoke fondly of conservative outlets like Fox News, Breitbart and The Blaze, they also signaled a desire to seek out sources that may challenge their beliefs. And that includes Trump's favorite media punching bags.

Leach, like Trump, said he's "not a fan of the mainstream media." But the 18-year-old political science major's reasons were different from what you might expect from the president.

He said mainstream news outlets are so slanted against conservatism that it has given rise to alternative media, "which gives these fringe elements and certain movements power."

Leach said he was wary of clicky but dubious outlets like Occupy Democrats on the left and the Conservative Tribune on the right that pop up on his Facebook feed.

"It's clickbait journalism," he said. "It's 21st century yellow journalism."

Nevertheless, Leach does watch CNN, and he said he's a fan of Anderson Cooper. He also watches Fox News and MSNBC, and reads The Wall Street Journal. And after some initial skepticism, he warmed up to Breitbart, the right-wing outlet where top White House adviser Steve Bannon previously served as chairman.

"Breitbart is interesting," Leach said. "I wasn't always a fan of them, but I came around because, like I said, if the mainstream media won't give us facts, we have to find our facts somewhere else."

Every year, young conservative activists make the pilgrimage to CPAC for speeches, workshops and revelry. The cavernous, glimmering convention center here has been teeming since Wednesday with fresh-faced teenagers and twentysomethings decked out in Republican regalia. A conference organizer said 55% of last year's attendees were students.

Polling data has shown that young people maintain an eclectic media diet, a trend driven in part by social media. In a 2015 study by the American Press Institute, almost nine in 10 millennials said they often encountered "diverse opinions," with three-quarters saying they investigated perspectives that differed from their own.

Coleman Theodore, a 19-year-old student at the College of Charleston in South Carolina, said he watches CNN and Fox News, and reads both Breitbart and BuzzFeed.

"When it comes to the mainstream media, I don't see at it as something like fake news," said Coleman, who wore a bow tie and a "Big Government Sucks" pin on his lapel. "I see it as a good chance to get your source from both sides."