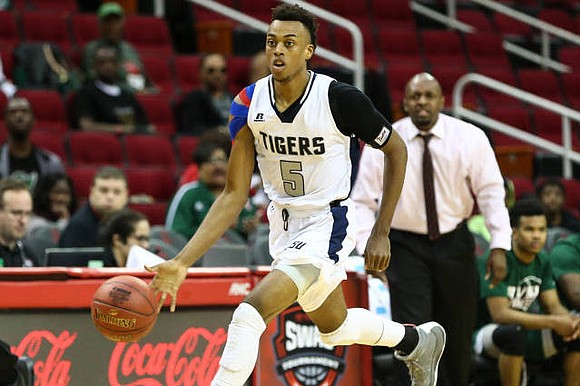 Montgomery, Ala. – Tevin Bellinger scored 20 points and Zachary Hamilton added 17 points and eight rebounds as the Panthers (11-19, 8-8 SWAC) won on the road at the Dunn-Oliver Acadome.

Ja’Donta Blakley scored 13 points, doled out eight assists and had five rebounds and three steals while Troy Thompson chipped in with a dozen points as PVAMU shot 53 percent from the floor.

JSU took an 11-point lead into halftime and traded baskets evenly in the second half while holding UAPB to 32 percent field goal shooting as a team.

Zach Lofton had 15 points and Kevin Scott added 13 points for the Tigers, who now lead Alcorn State (idle tonight) by one game for the right to be the SWAC’s No. 1 seed in tournament play.

During the run, Scott connected on a 3-pointer, Lofton hit a pair of lay ups, Marvin Jones came up with a dunk and Jefferson scored inside.

Itta Bena, Miss. – Ta’Jay Henry made the go-ahead layup with 2:25 remaining as the Delta Devils outscored the Tigers 9-5 down the stretch to pick up back-to-back victories.

Marcus Romain led with 24 points and six rebounds and Isaac Williams shot 9-of-13 from the floor to score 20 points for the host Delta Devils (6-24, 6-11 SWAC), who shot a stifling 61 percent from the field as a team.