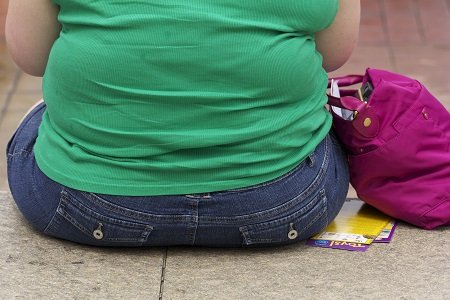 A new study concludes that excess belly fat, even if you are skinny everywhere else, may be even more deadly than being obese or overweight. And that's saying something when you know that being obese already increases your likelihood of having a heart attack, a stroke, diabetes or even cancer. Credit: (Photo: Ferre' Dollar/CNN)

(CNN) — Being overweight may impact not only your health but your future child's development as well, a new study suggests.

Children of obese parents may be at risk for developmental delays, says the study, published in the Journal of Pediatrics.

In the United States, an estimated one in five women is obese when they get pregnant, registering a body mass index above 30. The healthy average is between 18.5 and 24.9.

But few studies have looked at the father's weight, even though 20% to 30% of US adults -- both male and female -- are obese.

A team from the Eunice Kennedy Shriver National Institute of Child Health and Human Development set out to learn more.

"Our study is one of the few that also includes information about fathers, and our results suggest that dad's weight also has significant influence on child development," said lead researcher Dr. Edwina Yeung, an investigator at the institute.

Effects differ based on the heavier parent

The researchers looked at 4,821 children from 4 months old to the age of 3, between 2008 and 2010, and found specific effects on children, depending on which parent is obese.

Compared with normal or underweight mothers, children of obese mothers were more likely to have difficulty using small muscles, such as those in their fingers or hands.

Paternal obesity was associated with increased risk of failing at personal-social activities, such as feeding themselves, playing and undressing themselves. Those born to extremely obese couples also were more likely to fail problem-solving tests.

The researchers used data from the ongoing Upstate KIDS study, which follows over 6,000 children born in New York state.

It aims to track the growth, motor and social development of children and its correlation with infertility treatments, obesity, rising maternal age and pregnancy complications.

Parents are asked to regularly complete the Ages and Stages Questionnaire for their children.

"The questionnaire is a screening tool. It's an indicator of whether a child is on track for behaviors appropriate to his or her age," Yeung explained.

The tool was designed to pinpoint development progress and catch delays in children up to the age of 6.

Yeung's team looked at reports recorded by parents at 4, 8, 12, 18, 24, 30 and 36 months. According to Yeung, although parents are self-reporting information, the potential for bias is small, as questions are straightforward (PDF).

"The fine motor skills part, for example, asks such questions as whether the child can turn the pages of a book or whether he or she can stack blocks," she explained.

Mothers also completed a questionnaire about health status and lifestyle at enrollment to determine both parents' height and weight before pregnancy.

According to the study authors, factors associated with obesity -- such as lower income and education, smoking and alcohol use -- were taken into to consideration when analyzing the results.

Weight at delivery was taken from electronic birth certificates.

It is not unclear exactly why parental obesity might increase developmental delays in children.