The new face of Mother Emanuel 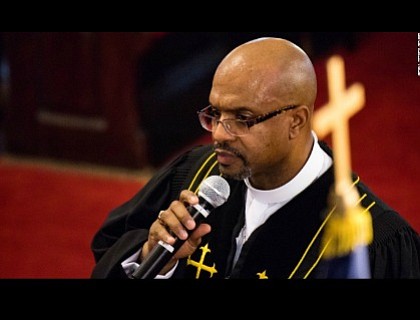 COLUMBIA, South Carolina (CNN) — The young pastor stood in a house filled with mourners ready to minister. His parishioner had been strangled, her body dumped.

The Rev. Eric S.C. Manning prayed with the victim's devastated mother, reciting from Psalms, one of his favorite books in the Bible: "I will lift up mine eyes unto the hills, from whence cometh my help." Days later, Manning led the funeral for the young woman.

It was his first eulogy for a murder victim.

"Standing there delivering the eulogy was hard but God brought me through that," he said, recalling that emotional moment 14 years ago.

Over the years, Manning has dealt with tragedy and death, including in his own family.

And the prayers and comfort he knows how to give to people who have lost a loved one in a sudden, savage way prepared him for what is one of the toughest recent pastor assignments in America: being the spiritual leader of Emanuel African Methodist Episcopal Church in Charleston, South Carolina, where white supremacist Dylann Roof killed nine members, including the church's beloved pastor, during a Bible study in June 2015.

"God, through every aspect, every juncture of my life, was preparing me for this time," said Manning, 49, who was handpicked to shepherd a traumatized congregation that he admits he's still figuring out how to lead. "No one's ever seen this before."

Gifts and graces for the situation

Manning is a dignified man who often wears one of the 30 to 40 bow ties he owns. He wore his clergy robe when he sat in a Charleston courtroom last month providing what he called "a ministry of presence." Armed with his Bible, he listened as family members of victims and survivors gave graphic, emotional testimony during Roof's federal trial. Sometimes, Manning placed his hand on a shoulder or gave a hug.

"He has all of the gifts and graces that a situation like that could call for," said the Rev. Wendell Christopher Sr., who knows Manning and once led the Maryland church where the parishioner was strangled in 2002. "They couldn't have appointed a better man, a better pastor than Rev. Manning."

A jury swiftly convicted Roof on all counts. On Tuesday, the jury will decide his sentence. Some family members of victims appear torn over whether Roof should be sentenced to death.

Manning, who is against the death penalty, said the trial drained him. But he plans to be back in court, Bible in tow, on Tuesday for phase two.

Summoned to a traumatized church

Roof targeted the historically black church, often called Mother Emanuel, on June 17, 2015, because he wanted to start a race war, he told the FBI. He showed up at the Bible study, where the group welcomed him and handed him a sheet of verses. He sat with the victims for about 15 minutes and then, when they stood for prayers, pulled out a Glock .45-caliber pistol and fired 70 rounds at them.

Last June, a few days after the anniversary of the massacre, Manning was working in his office at Bethel AME in Georgetown, South Carolina, when his phone rang. It was Bishop Richard Franklin Norris, leader of the 7th Episcopal District that includes the scores of AME churches in South Carolina.