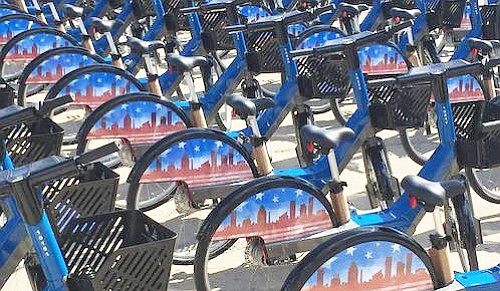 Baltimore Bike Share was launched in October 2016 with 21 stations and 185 bikes and has been a hit with residents. The program is run by the Office of the Mayor and the Baltimore Department of Transportation. Riders took more than 5,800 trips and rode 8,000 miles in the first 30 days of operation, The program is set to expand to 50 stations and 456 bikes in the spring of 2017, Courtesy Photo/Baltimore Bike Share

BALTIMORE — Baltimore Bike Share has announced that Downtown Partnership of Baltimore is providing $10,000 to subsidize new monthly Bike Share passes to enable low-income residents better access to what the organization says is a convenient and healthy way of getting around town.

It’s the first time that Downtown Partnership has provided such a contribution to Bike Share, which began last fall and is run by the Office of the Mayor and the Baltimore Department of Transportation.

“By this spring, there will be 50 Bike Share stations with more planned,” said Michael Evitts, a spokesman for Downtown Partnership of Baltimore. “The first stations were clustered in the most densely-populated downtown core but it is expanding rapidly out into communities in West and East Baltimore where the household income level drops. The city wants to make sure that the cost of a monthly pass for the program isn’t out of reach for any resident who wants to take advantage of Bike Share.”

With the new Downtown Partnership Access Pass, riders will pay just $3 for unlimited one-hour trips each month, an 80 percent savings over the regular rate.

The Downtown Partnership Access Pass will be available Spring 2017 for the first 200 people who sign up and passes may be renewed each month and cancelled at any time.

To qualify for the pass, residents must already be enrolled in the Maryland Food Supplemental Program and those who sign up will receive a free helmet.

“Bike Share is already an important part of Baltimore’s transit infrastructure and thanks to the generosity of Downtown Partnership and the new Access Pass, it will be more affordable and easily available,” Mayor Catherine Pugh said in a statement. “If other organizations follow Downtown Partnership’s lead, we will be able to expand the program to more individuals and provide how-to-ride classes.” 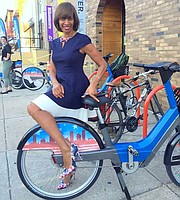 There are various opportunities for businesses and community groups to align themselves with Baltimore Bike Share as it grows and gains new riders, according to Jon Laria, a partner at the law firm of Ballad Spahr and chair of the mayor’s Bicycle Advisory Commission.

Bike Share has been a hit since it launched with 21 stations and 185 bikes in October. Riders took more than 5,800 trips and rode 8,000 miles in the first 30 days of operation and the program is set to expand to 50 stations and 456 bikes in the spring of 2017, officials say.

Bike Share programs are reportedly operating in nearly 60 cities across the country and at least 855 cities worldwide.

“There is ample evidence from cities around the world that Bike Share is good for people’s health and the environment. Bikes are an economical transportation choice and Bike Share has proven social and economic benefits to communities that have it,” Evitts said. “For all these reasons, Downtown Partnership felt it was important to make the program as affordable as possible. Since we have announced our donation, the response on social media has been incredibly strong.”