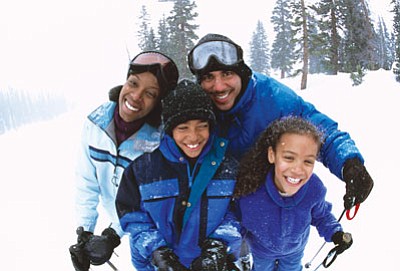 Wear several layers of lightweight, loose-fitting clothing. The air between the layers acts as insulation to keep you warmer. For more information on emergency preparedness, visit: https://goo.gl/Dnygie. Metro Creative Graphics

(CNN) — Skiing and snowboarding are a lot of fun.

Getting to the resorts isn't.

Unless you're staying in slopeside lodgings, driving to the action often involves dicey two-lane roads. And at the end of the day, you're back behind the wheel -- fuming, stuck on gridlocked access roads.

Now Amtrak is improving the lot of Colorado skiers as it debuts the Winter Park Express seasonal route on January 7.

A handful of small American resorts, like Massachusetts' Wachusett, have rail access but they also involve shuttles. The Winter Park Express is different.

"It's the only rail connection that takes you to the ski lifts themselves," says Amtrak spokesman Marc Magliari.

"There's no other mode of transportation needed: You can just grab your skis, hop on the lift and you're skiing within minutes," says Steve Hurlbert, Winter Park's director of communications. "You're also steps from the rental shop if needed."

The Winter Park Express is the successor to the Ski Train, which was not affiliated with Amtrak and ran the same route from 1940 to 2009, when losses proved too big even for billionaire owner Philip Anschutz.

For its first season, the Express will operate a round trip every Saturday and Sunday and on holiday Mondays until March 26. One-way tickets cost $39-$59.

Reviving the route actually was a grassroots initiative from train employees in the Denver area.

Brad Swartzwelter, the president of the conductors' union, worked for the Ski Train when he was in college and thought it'd be great to bring it back. He and other conductors presented the plan to Amtrak and Winter Park management, who got on board.

In March 2015, Amtrak ran a couple of test trips that sold out in hours.

"I sensed people were thrilled to death to be on the train," says James M. Souby, president of the Colorado Rail Passenger Association, who took both 2015 journeys. "They found the equipment spacious and those who were veterans of the previous trains said it was much easier to don boots and grab equipment on the Amtrak Superliner cars."

After leaving Denver at 7 a.m., the train travels 56 miles, up 4,000 feet and through 29 tunnels -- including the 6.2-mile-long Moffat Tunnel, which goes under the Continental Divide.

"The views are stupendous as you look out over Denver and the plains beyond, often by moon and star light," Souby says.

Aside from the sense of relaxation inherent in rail travel, the Express is practical. For instance, while there are lockers at the resort, passengers can also put their ski or snowboard boots on the train and leave their street shoes onboard.

"The train is parked and secured in nearby Fraser during the day," Hurlbert explains. "When it picks up at Winter Park to return to Denver, people find all of their stuff waiting exactly where they left it. As long as you don't need something during the day, just leaving it on the train is by far the most convenient option."

Hurlbert says that in the future there may be special fares combining transportation and lift tickets.

"We're also working on ways where a group could get exclusive occupancy of a railcar, which is good for ski clubs," says Magliari.

And now, a word of warning to those looking forward to some après-ski drinking, since they won't have to drive: There's no alcohol on the train.

"It's a family environment," Magliari says, though he adds that options may open up when groups can charter their own car.