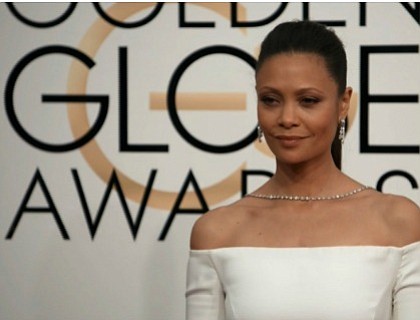 Fallon's monologue included some political humor -- noting the Globes is "one of the few places left that still honors the popular vote"-- and a small snafu.

"Already the teleprompter is down, so this is a great way to start the show," Fallon said right off the bat.

There was also history made early on in the night.

Tracee Ellis Ross won for best actress in a musical or comedy TV series. She became the first black woman to win in that category since Debbie Allen won for "Fame" in 1983.

"This is for all of the women, women of color and colorful people whose stories, ideas, thoughts are not always considered worthy, valid and important," Ross said. "But I want you to know I see you. We see you."

"This is incredible," exclaimed creator and star Donald Glover after his show, which has a majority black cast, won. "I really just want to thank Atlanta and all the black folks in Atlanta. For real, just for being alive...and being amazing people. I couldn't be here without Atlanta."

"This isn't the first time I have been mistaken for Ryan Reynolds," Gosling joked before becoming serious and thanking lady love, actress Eva Mendes for her support during filming. He dedicated his win to her brother, Juan Carlos Mendes, who died of cancer in April at the age of 53.

The Globes paid tribute to mother and daughter actresses Debbie Reynolds and Carrie Fischer with a video highlighting some of their most memorable film roles.

Reynolds died one day after Fisher in December.