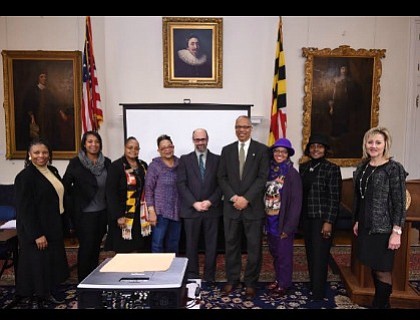 On December 16th, 2016, The Hyattsville Community Development Corporation (HCDC) was awarded a $50,000 grant by the Maryland Commission on African American History and Culture (MCAAHC) and Maryland Historical Trust (MHT) through the African American Heritage Preservation Program.

North Brentwood, Md. — On December 16th, 2016, The Hyattsville Community Development Corporation (HCDC) was awarded a $50,000 grant by the Maryland Commission on African American History and Culture (MCAAHC) and Maryland Historical Trust (MHT) through the African American Heritage Preservation Program. These grant funds will be used for interior renovations and rehabilitation of Sis’s Tavern, a former “juke joint” with a rich past in the Town of North Brentwood. Hailed as a model partnership at the State’s award announcement ceremony, the Town of North Brentwood and HCDC began fundraising and planning for the project two years ago. Their partnership previously raised and budgeted a total of $303,000 towards the ongoing project: cleaning up the facility and nearby property; stabilizing the tavern structure; abating hazardous substances; and assessing, planning, and commencing reconstruction of the tavern, while simultaneously assessing feasibility for the redevelopment of adjacent vacant parcels.

Initially operated as a grocery starting in 1911, and then as a tavern and music hall, the building has been owned and operated by residents of Prince George’s County’s first African-American incorporated community, North Brentwood, and served town residents for over eighty years. It became known as “Sis’s Tavern” during the 1950’s, when it was first leased by Marie “Sis” Walls; and later became “Baby Dee’s,” named after subsequent owner Deloris R. Spriggs. It was a central social hub for the Town, attracting famous acts like Duke Ellington and Pearl Bailey during its heyday, who would come to perform after hours when visiting the Howard Theatre in D.C. The building also housed a barbershop, in an addition (c. 1920), which was operational until Baby Dee’s closed in 1996. Currently the building is vacant and is undergoing reconstruction and restoration.

Sis’s Tavern/Baby Dee’s is extremely important to the Town’s cultural heritage. Many longtime residents have memories and stories from seeing musical acts or going to the barbershop, and are eager to see the building restored in the community. Other sources of funding come from a State of Maryland Bond Bill, a Prince George’s County Façade Improvement Grant, a MD Community Legacy Grant, a National Trust for Historic Preservation Grant, a Preservation Maryland Grant, and budgeted funds from The Town of North Brentwood.

Through a partnership of the MCAAHC and the Maryland Historical Trust (MHT), the African American Heritage Preservation Program (AAHPP) offers assistance to organizations and private citizens in their sponsorship of successful acquisition, construction or improvement of African American heritage projects. The goal of the AAHPP is to identify and preserve buildings, communities and sites of historical and cultural importance to the African American Experience in Maryland.

To learn more about the Sis’s Tavern rehabilitation process, go to http://hycdc.org/sisstavern or call the Hyattsville CDC (301) 683-8267.