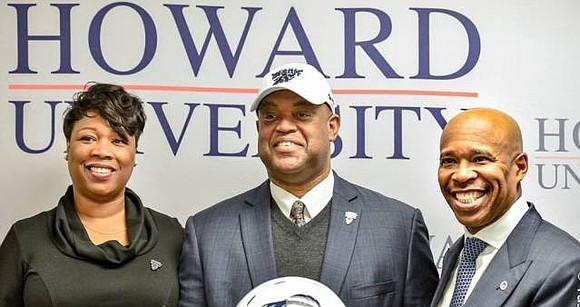 "After an extensive national search, we are especially excited to welcome Mike London to Howard University," said Dr. Frederick. "He joins our football program at an incredible time, and we look forward to seeing him build on the existent foundation that makes Howard University a great institution. The board of trustees and I believe he brings outstanding leadership and experience and is sure to be a tremendous resource to the entire Howard University community."

"We welcome Mike London and his family to Howard University," said Howard Athletics Director Kery Davis. "I believe Mike will be a strong leader and mentor for our student-athletes. He is a widely-respected coach with a resume full of achievements at the highest levels of college football and combines a drive to win with great integrity. We look forward to the future of Howard University football under his direction."

"I would like to thank President Frederick and Kery Davis for their confidence and belief in me," London said. "I am humbled that we have a shared commitment to take this university and this football program to greater heights. Some of the best football talent in the country is right here in the Washington metropolitan area, and I feel blessed to have the opportunity to work with the young men in the Howard football program and build on the strong heritage already in place."

London comes to Howard University after serving as an associate head coach/defensive line coach for the University of Maryland Terrapins. Before coaching the Terrapins, he was the head coach at the University of Virginia and the University of Richmond, respectfully for eight seasons. A highly-regarded recruiter, London helped bring in four top-35 classes during his tenure in Charlottesville and brought in two Virginia-bred five-star recruits in 2014 (247Sports). London led Virginia to an 8-5 season in 2011 and was named ACC Coach of the Year.

As the head coach at Richmond (2008-09), London captured 24 wins and led the Spiders to the FCS Championship in his first season. He helped 28 Spiders achieve all-conference honors in just two seasons.

London played defensive back at Richmond (1979-1982) before playing one season for the Dallas Cowboys.