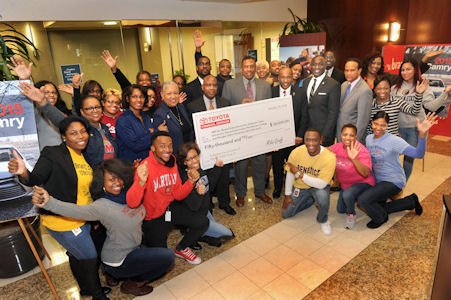 The foundation, formed by the nationally syndicated radio personality, unveiled the names of the 2017 schools as part of its on-going effort to assist these institutions in broadening and strengthening their efforts to raise money to help keep students attending HBCUs.

As one of the Tom Joyner Foundation ‘Schools of the Month’ next year, each school will be promoted by the Tom Joyner Morning Show and receive those funds raised from listeners, alumni and other interested parties that month. The show, aired in more than 90 markets around the country, reaches nearly eight million listeners every week.

“We’re excited to announce this year’s schools,” said Joyner, a graduate of Tuskegee University, is the foundation’s chairman and host of the nationally syndicated Tom Joyner Morning Show. “All of these schools have wonderful histories and traditions, and we want to make sure their students are able to stay in school and have the great experience, as I did, from graduating from a HBCU.”

This year’s schools are:

About The Tom Joyner Foundation

The Tom Joyner Foundation (http://tomjoynerfoundation.org) was founded in 1998 as the brainchild of nationally syndicated radio personality Tom Joyner. The mission of the Foundation is to support historically black colleges and universities (HBCUs) with scholarships, endowments and capacity-building enhancements. The Foundation has provided necessary support to every HBCU in its 18-year history to help sustain and preserve the legacies of these valuable institutions. Through fundraising and donor development initiatives, in excess of $65 million has been raised to support more than 29,000 students attending HBCUs. Additionally, the Foundation has recommended internships, offered matching grant support, and career development to deserving students.