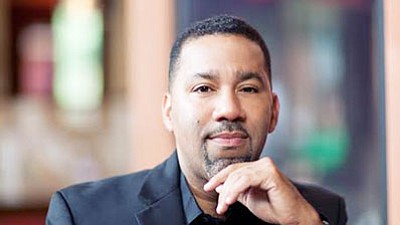 BALTIMORE — It’s rare for music concert venues to feature the headliner on stage, as well as on the menu, but that’s just what jazz lovers will experience when they attend the FLO of Jazz with award-winning keyboardist Marcus Johnson at Rams Head on Stage on Thursday, January 19, 2017.

Since launching a new wine brand called FLO, the NAACP Image Award winning musician, entrepreneur and author introduces his signature drink on the menus of the places where he performs.

Johnson is not new to venturing outside of his amazing skills on the keyboards. Almost immediately after starting his music career, he ventured into business by partnering with BET Network founder Bob Johnson to form his label Marimelj Entertainment Group, the production company Three Keys Music, recording facility Studio 8121, and two publishing companies Marimelj and Three Keys. He is CEO and President of them all. Marcus Johnson is also CEO and Founder of FLO Brands, LLC and FLO Wines, LLC.

Last year Johnson released an album entitled, Live and Direct and in February, he will release his first book, For the Love.

Johnson has released 17 albums in addition to Live and Direct. The Ohio native’s family moved to the District of Columbia when he was 12. The next year, his father won the Maryland Pick 3 Lottery and brought him his first keyboard. He went on to study traditional Jazz with Joe Thomas and Thelonious Monk. All through high school at Montgomery Blair High, he played in the Jazz band. After graduation, he attended Howard University and went on to graduate studies at Georgetown University where he received an M.B.A. and J.D. in Law. While at Georgetown in 1997, he released his first independent album Lessons in Love, which sold 40,000 copies.

As if he doesn’t do enough already, Johnson mentors young artists. Whten it comes to his new venture FLO, Johnson is ready to push all limits.

“I will never stop unless I stop selling wine. Everything is to compliment the other. We are in— the District of Columbia, Maryland and Virginia— 300 stores,” Johnson said.

Eunice Moseley is a Public Relations Strategist and Business Management Consultant at Freelance Associates, as well as Promotions Director (at-large) for The Baltimore Times. For more information, visit: www.ThePulseofEntertainment.com.