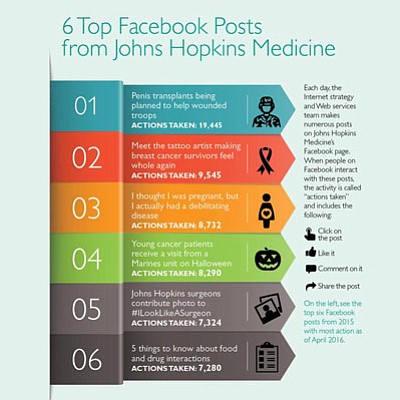 SARA (Sponsored Academic Research Agreement), aims to accelerate the development of breakthrough technologies by making it easy for researchers and Facebook to work together. Courtesy Photo

BALTIMORE — Johns Hopkins University and the Johns Hopkins Applied Physics Laboratory have been selected to join a group of universities and research centers participating in a research agreement sponsored by Facebook’s Building 8, a new team

The sponsored academic research agreement, or SARA, aims to accelerate the development of breakthrough technologies by making it easy for researchers and Facebook to work together.

“APL’s scientists and engineers have developed some of the most advanced technologies anywhere,” Ralph Semmel, APL’s director, said in a news release. “This agreement provides an avenue through which we can explore potential applications of these technologies that are complementary to our traditional research areas.”

In addition to Johns Hopkins University and APL, 15 other universities have joined the initiative, including Stanford, MIT, Harvard, Princeton, UC Berkeley, Caltech, University of Arizona, Virginia Tech, and Georgia Tech.

In return for labor the universities will be paid by Facebook and gain a focus for their research that will become a reality rather than remaining theoretical, according to a report by TechCrunch, which publishes news and information about technology.

Facebook’s Building 8 research team reportedly needs help from academia to invent futuristic hardware. But today’s pace of innovation doesn’t allow for the standard 9 to 12 month turnaround time it takes universities to strike one-off research partnerships with private companies, according to the agreement.

The agreement eliminates the need for time-consuming negotiations and faculty approvals, according to Regina Dugan, Facebook’s Building 8 executive.

“With [the agreement], Building 8 Facebook has created a university deal with terms that are project-by-project and designed to be fair and appropriate for all universities. All university partners sign the same agreement, allowing Facebook to build the relationships quickly and at scale,” Dugan said.