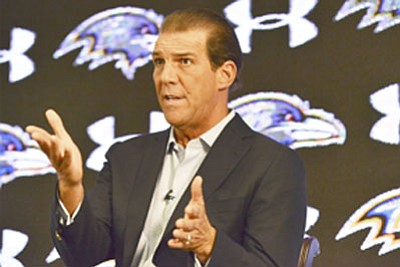 BALTIMORE — The Baltimore Ravens finished yet another season without making it to the playoffs. Playing in the postseason seemed to be a foregone conclusion when the Ravens were one of the only undefeated teams earlier in the year. So, what happened?

Team owner Steve Bisciotti described how things broke down at a press conference on Tuesday, January 10, 2017.

"I thought our offense started playing better, and then our defense collapsed in the last four weeks— from the No. 1-rated defense," Bisciotti said. "Then we started giving up 28 and 30 points. The minute you start counting your strengths then they can show up as weaknesses. It’s such a moving target that it is frustration— I can’t say it’s anger."

Bisciotti is correct in pointing to the demise of the defense. The defense gave up 30 points in a close loss to the New England Patriots in week 14. The following week, in the last home game of the season, the Ravens gave up 26 points to a struggling Eagles offense. Fortunately for Baltimore, C.J. Mosely was able to break up a Carson Wentz pass to stop Philadelphia from converting the winning two-point conversion.

Perhaps the biggest let down was when the arch-rival Pittsburgh Steelers put up 31 points in what amounted to the AFC North divisional championship game. That was one of the most frustrating aspects of the season for Bisciotti.

"It’s frustrating when you are waiting for something else to improve to get you over the hump and even if it does, something that you had been counting on disappoints you," Bisciotti explained. "I don’t think anybody would have expected Pittsburgh to put up 21 points on us in the fourth quarter after that defense held them to 10 for three quarters.

To lose a lead like that, and then have us go right back down the field, and Joe [Flacco] show that kind of mettle that he has shown over and over and over again in big games and in tight games down the stretch coming back to win. We did what we had to do, offensively, and then the defense gave it up. All of a sudden, we’re looking to scrutinize that defense as much as we have to the offense.”

The Ravens gave up 27 points in the season finale on the road against the Bengals. Instead of winning the divisional title, Baltimore lost two straight games leaving the team with an 8 and 8 record.

The Ravens 2016 record is the third time the team has not finished above .500 under the leadership of head coach John Harbaugh. Baltimore finished with an 8 and 8 record in 2013. Harbaugh had his worst season as the coach of the Ravens in 2015, finishing with a disappointing 5 and 11 record. Baltimore failed to make an appearance in the playoffs for only the third time with Harbaugh at the helm.

Bisciotti made a significant investment in the free agent market by signing safety Eric Weddle to a four-year, $26 million contract. Speedy wide receiver Mike Wallace was also signed to a two-year, $11 million deal.

Big splashes in the free agent market are not the norm for the Ravens. Those moves during the off-season showed that the franchise has a sense of urgency to return to prominence.