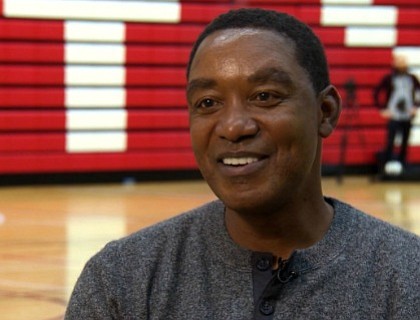 These are tumultuous times in the US. For two-time NBA champion Isiah Thomas, who is a native son of Chicago -- a city plagued by violence and gun crime -- part of the solution is sport. CNN

(CNN) — These are tumultuous times in the US.

For two-time NBA champion Isiah Thomas, who is a native son of Chicago -- a city plagued by violence and gun crime -- part of the solution is sport.

"I believe that through playing, you can bring people together," Thomas told CNN Tuesday. "The power of play and the power of sport. What's missing from a lot of our communities is play."

The former point guard is now trying to make a difference in his hometown Chicago. The city where President Obama Barack got his start in politics recorded 762 murders last year, the highest number in two decades, and 266 more than in 2015.

In 2011, Thomas helped organize the Peace Game, which a year later grew into the Chicago Peace Basketball Tournament, a competition that brings the city's rival gangs together under the roof of the St. Sabina Gym.

"In a simplistic form, play gives you the ability to get to know someone," says Thomas. "Once you get to know someone it's very hard to kill that person. When you take play out of the community, people don't form teams. They don't have bonds.

"So when there's no play, they form gangs that simulate teams with colors, with rules, with everything else, but then they play a different kind of game.

"Just putting play back into the community, giving the kids educational resources that they can use to explore and expand their minds."

Thomas isn't just trying to make a difference in Chicago. He is a passionate believer that sport can help foster positive relationships worldwide.

After retiring, he helped form the Toronto Raptors in Canada -- the only current NBA side located outside the US.

He was speaking to CNN on the eve of the NBA game between the Indiana Pacers and the Denver Nuggets that takes place at London's O2 Arena Thursday.

It's part of the NBA's long-running Global Games initiative that's seen matches played all over the world: from Rio to Rome, Beijing to Barcelona.

"The more we expand and the more we expose our game to others, the closer it brings us together," says Thomas.

"The sport connects and overlaps boundaries, and people are allowed to be at social gatherings together -- communicate, talk, love, bring family together.

"The game goes well beyond points, rebounds and assists. It really connects people together."

This is the seventh time a regular season NBA game has been played at the O2. Last year the Raptors overcame the Orlando Magic, while the New York Nicks, the Brooklyn Nets and Thomas's own Pistons have all headed across the Atlantic to London.

But Thomas admits there's still a long way to go before the NBA can truly consider itself a global game.