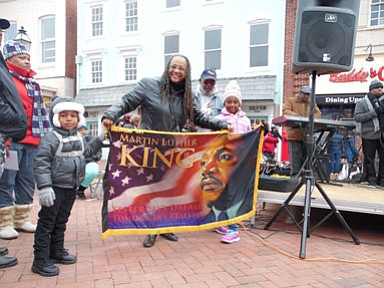 The third Annual Martin Luther King, Jr. Memorial Parade was held in Annapolis on Jan. 16, 2017. Mayor Michael Pantelides participated in the parade, which was hosted by the City of Annapolis. In addition to a lineup of local officials, businesses, various organizations and bands, individuals of all ages participated in this year’s celebration of love and unity. Helen Chambers, a well-respected leader and retired educator served as the parade’s grand marshal. The parade’s founder and this year’s co-chair. Phyllis Tee Adams is pictured holding the Dr. Martin Luther King, Jr. banner. Photo by Andrea Blackstone

ANNAPOLIS — The City of Annapolis and the Annapolis community continued their collaboration to commemorate the life and work of the Rev. Dr. Martin Luther King, Jr. at the 3rd Annual Martin Luther King, Jr. Memorial Parade and live concert on Jan.16. Enthusiastic parade goers of all ages lined West Street toward the City Dock area as the United States Naval Academy Marching Band, the Annapolis Police and Fire Honor Guard kicked off the lively celebration.

Helen Chambers, a well-respected leader and retired educator, was included in the lineup. Riding in a Corvette, she proceeded down Main Street with a smile. Chambers, the parade’s grand marshal, worked in the education field for 62 years. While seated near a stage on Main Street, where local bands performed a post-parade concert, Chambers later explained that she saw numerous people whom she had not seen for a long time. She heard many voices call her name on the mild January afternoon.

“It was an unusual experience, because I have been to parades and watched them in other places, but never have I been involved so that I could see people who were watching the parade, and the enthusiasm of the people, and the appreciation of the people... People wouldn’t believe it,” Chambers said. “I felt awesome just being a part of it, and I was so glad to have been selected.” 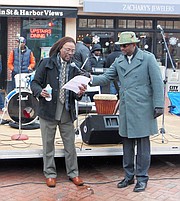 Chambers founded the head start in Anne Arundel County in 1965. Additionally, she served as the Anne Arundel Community Action Agency’s first director, and later formed the Little VIP Day Care Center in Parole. Many young people who began their educational journey under her guidance are now graduates of top tier colleges.

“It’s an honor because they’re not only honoring my grandmother, but the Rev. Martin Luther King, Jr.,” Barrett Chambers said.

Chambers, set the tone for commemorating the life and work of King. The parade, which was organized by civilians appeared to renew the spirit of collaboration, togetherness, community morale, and legacy in Annapolis. Priscilla Montague, the parade’s creator, served as this year’s co-chair.

Darius A. Stanton is the new chair of the Annapolis Martin Luther King, Jr. Parade committee. He will serve as the event chair until 2019, when he plans to pass the baton to an incoming replacement.

“It is so important for us to create a pipeline of leadership in our community, and there is plenty of talent. They just need the chance to lead. Look at what King did before [he turned] 40?"

Stanton mentioned the value of bringing the community together, after a record year of violence in the city of Annapolis, and a presidential campaign which has divided America. Stanton further explained that Annapolis had its first homicide in the city in the early morning of the Martin Luther King, Jr. holiday. In spite of this, Stanton feels that the celebration of love continued. He said that it opened up hearts.

“We pray that our love will continue to prevail over all violence and negativity on every level in the world,” Stanton also said.

Mayor Michael Pantelides participated in the parade, which was hosted by the City of Annapolis. The event was created under his administration. In addition to a lineup of local officials and businesses, various organizations and individuals participated in this

year’s celebration. Terrell Freeman drummed and also led a libation ceremony, while saluting the Creator and ancestors, as their names were called. Like Stanton and Freeman, other Annapolitans volunteered to pay homage to King’s dream of equality, while celebrating the spirit of brotherhood and sisterhood, upholding unity, and recognizing exemplary leadership.