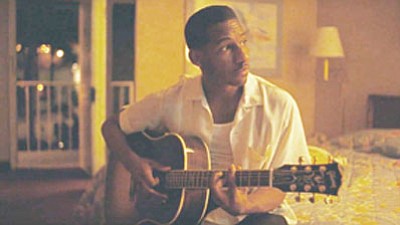 R&B artist Leon Bridges has been compared to greats like Sam Cooke. The music video for his song “Rivers,” which was shot in Baltimore after the unrest following the death of Freddie Gray has been nominated for the Grammy Award for Best Video. The video takes viewers to Sandtown-Winchester, Penn-North and other inner city Baltimore locations. The upcoming awards show will be broadcast live by CBS on February 12, 2017. Courtesy Photo

BALTIMORE — A music video shot in Baltimore has earned a Grammy nomination for an up and coming R&B artist who has been compared to greats like Sam Cooke.

Leon Bridges’ “River,” which has been described by MTV and others as healing and hopeful, has been nominated for Best Video at the upcoming awards show which will be broadcast live by CBS on February 12, 2017.

“Getting the Grammy nomination was exciting and a bit unexpected as historically the category tends to favor more pop driven videos and videos with bigger budgets and productions like Beyonce’s ‘Lemonade,’” Bridges said.

Competitors for the award just happen to include “Formation” by Beyoncé and “Up & Up,” by Coldplay.

“The nomination was shocking too, because we’re at the end of my album cycle and I was sleep when I got the text message, it was something I didn’t expect,” Bridges said.

The video for the song, which is on Bridges’ album Coming Home, was set in Baltimore after the unrest following the death of Freddie Gray. It takes viewers to Sandtown-Winchester, Penn-North and other inner city Baltimore locations.

Bridges sits in a motel room playing a guitar as footage from the city’s uprising plays on the television set. The video depicts a baptism, a man with a bloody shirt leaving a crime scene and a mother and son who have lost a loved one.

Bridges and video director Miles Jay say they wanted to capture the real and raw story.

“I wanted to showcase that through all of the injustice, there’s real hope in the world and what better place to show that then in Baltimore,” Bridges said. “We could have gone in many different directions with the video because, when I wrote the song four or five years ago, I wasn’t thinking about Baltimore but the honest story of the black community in Baltimore struck me and Miles also knew some folks personally.”

Jay discovered that Baltimore would serve as the perfect location for the video when he was researching a feature film project.

“Baltimore is a bit of a different world. I saw what was being portrayed in the media but then hung out with people, went to their homes and I wanted to tell stories of what happens to people after you see them on the media,” Jay said. “So much of the video was, me trying to pull from the source of Leon’s emotions and what he was trying to convey. And, besides, ‘River’ is one of my favorite songs of the year.”

The lyrics for the song include: “In my darkness I remember/Mama’s words reoccur to me/Surrender to the good lord/And he’ll wipe your slate clean…”

A review by MTV noted that the video intensifies that feeling brilliantly by anchoring it to racial injustice and the resilient spirit of the Black Lives Matter Movement.

The video features glimpses into a candlelight vigil and speaks to the resiliency of the city’s black communities, a Rolling Stone magazine review noted.

“The river has historically been used in gospel music as symbolism for change and redemption. My goal was to write a song about my personal spiritual experience,” Bridges said. “It was written during a time of real depression in my life and I recall sitting in my garage trying to write a song which reflected this struggle. I felt stuck, working multiple jobs to support myself, and my mother. I had little hope and couldn’t see a road out of my reality and the only thing I could cling to in the midst of all that was my faith in God and my only path towards baptism was by way of the river. I want this video to be a message of light. I believe it has the power to change and heal those [who are] are hurting.”

As he prepares to attend the 59th annual Grammy Awards, Bridges continues to work on his follow up album and has one wish— to work with Miles more because he took such a tasteful approach to their project, which is definitely something he says he needed.