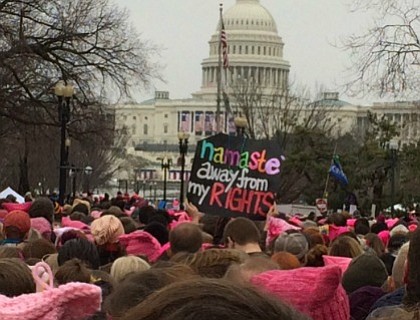 Crowds march toward the Capitol building at the Women's March on Washington. Stephanie Gatson/CNN

(CNN) — More than a million Americans took to the streets of the United States to protest Donald Trump the day after his inauguration. And that doesn't include the many thousands of people who took part in the main event -- The Women's March on Washington -- for which there was no official crowd estimate.

CNN did not make its own crowd estimates, but compiled official estimates from law enforcement agencies for many of the "sister marches" around the country that drew large crowds. There were other marches in cities around the world.

Marchers planned events in many cities outside the nation's capitol. CNN looked at media reports citing law enforcement figures in many of those cities. Massive gatherings in places like New York and Denver were not included because authorities there did not immediately offer an official estimate.

Crowd sizes became an issue in Washington Saturday when Trump visited the CIA and during remarks to employees there, accused an unnamed news organization of misrepresenting the attendance for his own inauguration.

"We had a massive field of people," he told the US intelligence agency. "You saw that. Packed. I get up this morning, I turn on one of the networks, and they show an empty field. I'm like, wait a minute. I made a speech. I looked out, the field was, it looked like a million, million and a half people. They showed a field where there were practically nobody standing there. And they said, 'Donald Trump did not draw well,' " the President said.

"It looked honestly like a million and a half people, whatever it was, it was, but it went all the way back to the Washington Monument and I turn on, by mistake, I get this network, and it showed an empty field. Said we drew 250,000 people. Now, that's not bad. But it's a lie," he said.

It wasn't clear which outlet Trump was referring to. CNN has not reported a specific size to the crowd since there has been no official estimate.

Later, White House press secretary Sean Spicer went on a tear against the political press for reporting on crowd size. The National Park Service, which oversees the National Mall, has been instructed by Congress not to offer crowd size estimates.

"This was the largest audience to ever witness an inauguration, period," Spicer said, although evidence suggests otherwise.