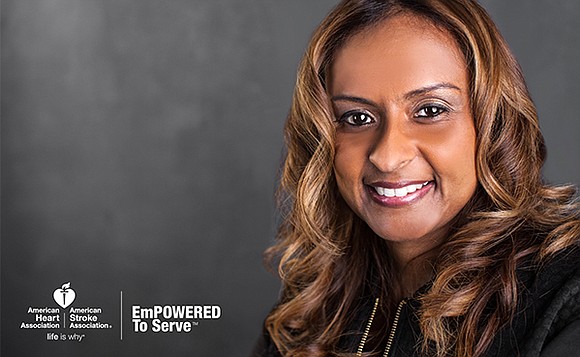 Dallas, TX — Music industry mogul Shanti Das and the American Heart Association are teaming up to bring awareness to heart disease and stroke, the social determinants of health and opportunities to become a volunteer ambassador for community change in honor of Martin Luther King, Jr. National Day of Service, Monday, January 16.

Das, who is one of the newest national ambassadors for the American Heart Association’s EmPowered To Serve™ movement, is featured in Take Me Home, a short video docuseries produced by the Association in collaboration with MIRAR. The video, which also includes R&B songstress Demetria McKinney, chronicles Das’ life growing up in a food desert in Peyton Forest, a community of Atlanta, Georgia.

Heart disease, including stroke is the No. 1 killer of all Americans, and African Americans and Hispanics are at increased risk compared to other populations. All too often, people in urban communities suffer from diabetes, high blood pressure and obesity leading to heart disease and stroke at much higher rates than their Caucasian counterparts. In too many of the communities there are barriers to heathy living such as, lack of access to large grocery stores with fresh fruits and vegetables; lack of access to safe, places to exercise and lack of equitable heath care.

“After learning about the social determinants of health, I decided to learn more about how that may have impacted the community where I grew up. In the process, I learned that I basically grew up in a food desert, which is a community without easy access to healthy food options. This is driving a lot of health issues in my community such as high blood pressure, diabetes, heart disease and stroke,” says Das, CEO and founder of Press Reset Entertainment. “In fact, I found that 2 million Georgians, including 500,000 children live in food deserts. There are more than 35 food deserts just in the perimeter of Metro-Atanta.”

Das moved back to Atlanta after working for many years in New York. She will work with the American Heart Association to raise health awareness in the community and to work with civic leaders to remove the barriers to heathy living where healthier options will be more accessible. “I want to make sure that my generation is going “home” and helping their communities to get active and making sure they have the proper access to healthy living that they need,” she says.

For more information about becoming an EmPowered To Serve volunteer ambassador, visit www.EmPoweredtoserve.org. Choose an action. Make an impact.

Media Note: Photos of Shanti Das and the Take Me Home private viewing event are available upon request.

About the American Heart Association

The American Heart Association is devoted to saving people from heart disease and stroke – the two leading causes of death in the world. We team with millions of volunteers to fund innovative research, fight for stronger public health policies, and provide lifesaving tools and information to prevent and treat these diseases. The Dallas-based association is the nation’s oldest and largest voluntary organization dedicated to fighting heart disease and stroke. To learn more or to get involved, call 1-800-AHA-USA1, visit www.heart.org or call any of their offices around the country. Follow them on Facebook and Twitter.