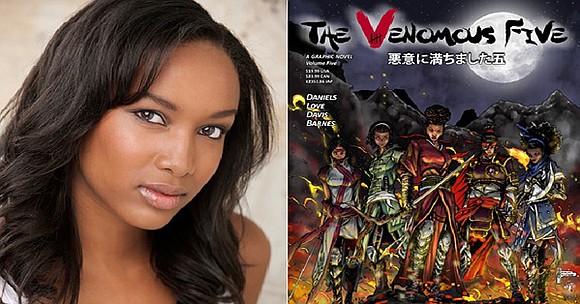 Nationwide — Between acting, heading a production company, and changing her 4-month old’s diapers, Krystal M. Harris has added a new talent to her career other than writing film scripts… writing comics/graphic novels.

Harris, who will next be seen opposite Algee Smith in the highly anticipated, “New Edition Story” biopic on BET, has been tapped to pen the female action/drama graphic novel, The Venomous Five. Set in the 19th century, The Venomous Five is a story of five former slave girls who surpass adversity to become the pride of Japan and the world’s fiercest martial arts warrior heroines.

The new graphic novel will bring on several black female illustrators in addition to Harris penning the graphic novel, and will feature illustrations lead by artist/illustrator and mother Julie Anderson. Women of color rarely get opportunities to champion this type of genre. The next wave of “Black Girl Magic” is not just showing how spectacular women are, it’s normalizing it.

“When I heard the concept I was immediately excited, using our rich history as black people and turning the pain we endured as slaves into a driving force to rise up in power was something that really got my wheels turning. Plus, black female martial arts and fantasy lore… what could get better than that?” said Harris

Michael Daniels, creator of The Venomous Five, sought out Harris because he had read her work and knew she would be the perfect person to bring this story to life. He was also adamant that telling this particular story of women’s empowerment would be impossible without bringing in strong female voices. According to Daniels, “The traditional way of men telling women’s stories are over. I’m glad The Venomous Five can be a part of the new wave of consciousness in story-telling.”

For more information and news on The Venomous Five, please call Michael Daniels at (323) 401-6973, email mddaniels@sbcglobal.net or visit www.thevenomousfive.com.