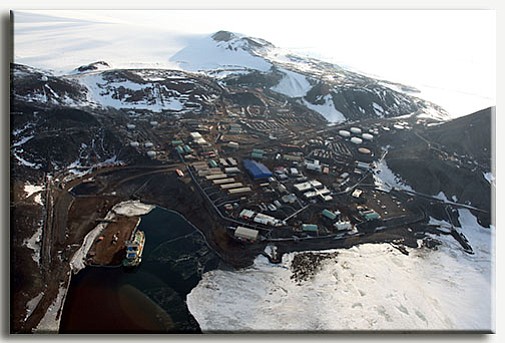 NSF is the main mission, Sailors must also keep their safety as a main priority. For all of the Sailors participating in Operation Deep Freeze, they can expect to operate in 20-degree weather and will be required to wear 3-4 layers of clothing to carry out their cargo-handling mission. Courtesy Photo

WILLIAMSBURG, Va. (NNS) -- Sailors assigned to Navy Cargo Handling Battalion (NCHB) 1 deployed to Antarctica in mid-January to support the U.S. Antarctic Program (USAP), the nation's research program on the southernmost continent, which is managed by the National Science Foundation (NSF).

NCHB 1 deployed to NSF's McMurdo Station, where less than one percent of the world's population has ever visited, as part of Operation Deep Freeze— the military's logistical support component of the USAP.

McMurdo, the main U.S. station in Antarctica, is located at the southern tip of Ross Island, and is the primary logistics facility for supply for NSF's Amundsen-Scott South Pole Station, 800 air miles inland, as well as remote field camps and is also the waste management center for much of the USAP.

As the USAP manager, NSF has a presidential mandate to manage three year-round research stations in Antarctica. McMurdo is the largest of the three stations and the globe's southernmost seaport.

More than 50 Sailors from NCHB 1 deployed to McMurdo Station during Antarctica's summer to offload containers of supplies to be used by scientists and support personnel. Cargo handlers will be working around the clock for nearly a month in below-freezing temperatures to transport hundreds of containers on and off the transport ship.

Military Sealift Command (MSC) chartered container ship MV Ocean Giant provides ocean cargo transport in support of Operation Deep Freeze. An MSC-chartered cargo ship and tanker have made the challenging voyage to Antarctica, which includes passage through a 15-mile ice channel, in places more than 13 feet thick, every year since the station was established in 1955.

Petty Officer 1st Class Derek McCleary, a Seabee from Harrisburg, Pennsylvania, will be participating in Operation Deep Freeze for a second time and will bring with him his experience to ensure the mission is accomplished safely and efficiently.

"We're the only command that supports McMurdo Station as far as getting cargo in and out of there," said McCleary. "It can only be done during a certain time of the year, because our winter is their summer -- so that's why we go when we go."

While McCleary has experience as a cargo handler, he looks forward to learning and new experiences so he can prepare the next group of Sailors for this annual mission to support the USAP.

"I think each time is a different experience; I'll be in a new leadership position this time around so there will probably be some new things to learn, expect, and teach to the next group of Sailors," he said.

Petty Officer 2nd Class Michelle Panniell from Baltimore, also is excited to go on the ice and do her duty as part of the hatch team.

"The hatch teams are people who string up the containers and other equipment so they can be moved," said Panniell. "We do things to balance the load and make sure no damage is done to that cargo."

One thing Panniell plans to do during her down time is collect some of the ice in a bottle to take home.

"So many people are amazed that I get to have this experience; all of my friends and family want me to bring something back, but I feel extremely fortunate and honored for this opportunity," she said.

While resupply and support the NSF is the main mission, Sailors must also keep their safety as a main priority. For all of the Sailors participating in Operation Deep Freeze, they can expect to operate in 20-degree weather and will be required to wear 3-4 layers of clothing to carry out their cargo-handling mission.

All sailors are issued special cold weather gear that adapts to the ice, including boots that have better grips and extra insulated jackets.