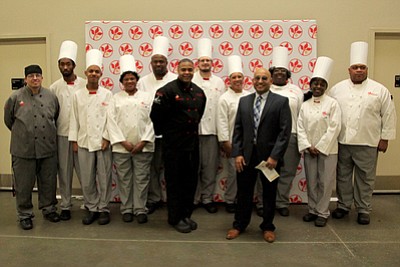 The transition from cook to chef was a 12-week journey for nine recent graduates of the Food Bank of Maryland’s FoodWorks Program, celebrated with their families, friends and staff of the Maryland Food Bank at Foodworks 22nd graduation ceremony last week.

The FoodWorks program started in 2010.

“Our primary focus was to address some of the root causes of hunger and poverty. Since we launched it seven years ago, we’ve produced one million meals for families with food insecurity across the state,” Del Guercio said.

“Every time we bring a class in we preserve more food that might otherwise perish, we provide more food to people in need and we offer more technical training to our students,” Del Guercio told the newest graduating class and their families in commencement remarks.

Many of the new chefs, like Stephen Hall, already had a background in food preparation and cooking. Hall was ready to take that next step. But as the program intensified, Hall told his fellow graduates, he became to more than just training and certification. Hall pledged to use his skills to impact the almost one million Marylanders suffering from food insecurity and hunger.

“I initially came to the program because I had never been professionally trained as a culinary arts professional. I worked as a line cook in restaurants for several years, “said Hall.

“As the weeks went by and I came to understand the depth and importance of the program, it touched my heart,” Hall emphasized. “I just wanted to be involved and do my best to further the goal of ending hunger.”

For class valedictorian Lisa Heard, FoodWorks was the fulfillment of a dream.

“This is a first step to a dream that I wanted to pursue for so long. It’s that first step of recognizing that ‘it’s possible’ said Heard who cooked professionally for family and friends, but longed to demonstrate her gift for cooking in a restaurant setting.

“If you have the gift and the skill, the fire in your belly to work hard, then Foodworks is a good starting foundation for people who are looking to do anything in the food service industry,” she said.

The Food Bank of Maryland began partnering with Community College of Baltimore County (CCBC) to offer the FoodWorks program in 2015. Kent Smedley, Dean of Workforce Development at CCBC was on hand to encourage the graduates.

“The career path you’ve chosen takes you into an area where the sky is the limit. The hospitality industry is an industry that has a pathway where you can keep learning and advancing your career,” Smedley said.

One in eight people in Maryland don’t have enough food to thrive. However, 39 percent of persons living in the areas served by Maryland’s Food Bank earn more than the allowable limit to qualify for federal or state relief, leaving the food bank as the only vehicle available to supplement what many low-wealth families can afford to buy in grocery stores.

The FoodWorks program and its chef training provides workforce development for emerging chefs, while allowing the Foodbank of Maryland to prepare healthy meals from food products that would have otherwise gone to waste.

Recruitment for the next FoodWorks 12-week training class is underway. For more information, www.mdfoodbank.org/foodworks/