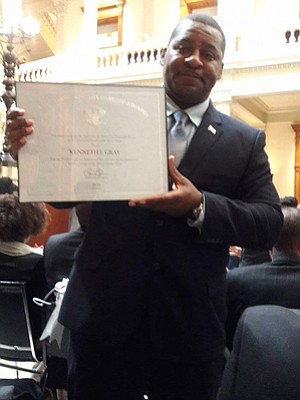 A few days before President Donald Trump took office, he received The President’s Volunteer Service Lifetime Achievement Award for his work with youth; This is the highest national honor to bestow upon a citizen.

Gray was among 44 other recipients from around the world honored by Sen. Donzella James (D-Ga.), Dr. Janice Barnett-Adams, and Pastor Lenora Wimberly-Peterson at former President Barack Obama’s Lifetime Achievement Awards Ceremony, held at the Georgia State Capitol Building in Atlanta, Ga. Along with a signed certificate of achievement from Obama, Gray received an official service award pin, and a congratulatory letter from the former president.

“Your volunteer service demonstrates the kind of commitment to your community that moves America a step closer to its great promise,” Obama wrote in Gray’s letter. “While government can open more opportunities for us to serve our communities, it is up to us to seize those opportunities. Thank you for your devotion to service and for doing all you can to shape a better tomorrow for our great Nation.”

Sherri Nelson, who was re-pinned as a 2017 recipient of President Obama’s Volunteer Service Lifetime Achievement Award, said that she nominated Gray to receive formal recognition because of his volunteer work helping homeless children in school systems nationwide. Nelson further explained that she noticed different activities, training camps, and community events for children that Gray posted on social media, mentioning the role that Gray plays in getting youth active outdoors, helped her make the decision.

“I reached out to him (Gray), and just got to talking to him, and it just seems like he has dedicated his life to this cause,” Nelson said.

Gray is personal trainer who provides mentorship, coaching, community outreach, fundraising, and sports clinics and camps, through his youth athletic program, under his company, Dominant Force. He said that empowering others to better their lives is important. As the vice president of the Meade Senior High School Alumni Association, Gray has helped to raise money for homeless students to provide basic necessities, food, and clothing for Meade Senior High School on an ongoing basis. The self-proclaimed “world coach” said he wants to unify local government, schools, and individuals together to accomplish goals.

“I think if you take care of the kids, everything is going to follow,” Gray said. “I am just doing what I love, and it has probably been over 25 years.”

The presidential award provides recognition at gold, silver, and bronze levels of service achievement, in addition to lifetime achievement. One lifetime achievement award requirement is completing 4,000 hours or more of community service. According to www.presidentialserviceawards.gov, the President’s Volunteer Service Award is an initiative of the Corporation for National Community Service (CNCS) and is administered by Points of Light— the largest organization in the world dedicated to volunteer service.

Awards are issued to individuals, families and groups who meet various eligibility requirements. Hours are measured over a 12-month period and awards are designated based on cumulative hours. Although volunteers may not seek recognition for their good deeds, their powerful messages may encourage others to take action. Nelson added that recognition can also be used to encourage youth to do more in the community.

“By this being the highest award that you can get from the president as a civilian, the prestige of this award alone opens doors within itself,” Nelson said. “And also by [Gray] receiving this award…he can then nominate some children who are doing excellent community work, because for some reason, we forget about the children that are actually taking their time, when they could be doing other things.”