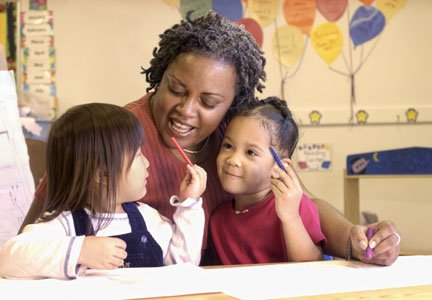 (CNN) — By the age of 6, girls already consider boys more likely to show brilliance and more suited to "really, really smart" activities than their own gender, according to a new study.

The US-based researchers found that at the age of 5, girls viewed themselves as being just as capable as their male counterparts in terms of brilliance. But by age 6, they were already perceiving their own gender differently.

The report, published Thursday in the journal Science, is based on results from a range of experiments on 400 children.

In one test, researchers told the children a story about a person who was "really, really smart."

"We were very careful to leave out any clues as to the person's gender," said researcher Lin Bian, a psychologist at the University of Illinois.

The children were then asked to guess who the protagonist of the story was. At age 5, both boys and girls picked out characters of their own gender.

But within a year, that had changed.

Boys still picked boys, she said -- but girls were picking boys, too.

"Suddenly, at age 6, girls became less likely than boys to do this," Bian said.

In another scenario, the children were tasked with an activity that was labeled as being for "really, really smart kids." At age 5, both boys and girls were enjoying these activities equally, said Bian. But by 6 and 7, the girls had lost interest.

However, in another task, the children were asked to choose who would get the best grades in school from four children, two girls and two boys. No difference was seen between the younger and older girls' likelihood of choosing their own gender.

The researchers believe the overall results imply that from a young age, children are already absorbing the stereotypes of their gender, such as what kinds of activities girls and boys "should" be interested in.

"When they enter school around 5 or 6 years of age, they get to have much more exposure to the cultural message, and that's when they learn a great deal of the information about the social world," Bian said. "It seems to lead girls away from the types of activities that are for really smart kids."

Young girls are learning these stereotypes from multiple sources: media, peers, teachers and parents, she adds.

But Madeleine Portwood, a child psychologist in the UK, believes it's due to developmental difference at that age. She was unsurprised by the findings. "Gender stereotyping is evident at age 6. ... Boys are more likely prone to telling everyone 'I am smart' or 'I am strong' and constantly require reassurance," she said. "Girls are more conciliatory and look at someone else's point of view."

Portwood, who is also director of the Witherslack Group of special educational schools, said this is what she hears regularly in the classroom and playground. Although society today, and teachers in the classroom, are addressing the balance, the matter still needs to be prioritized, she said. "This study raises awareness not to be complacent that we're raising equality," she said.