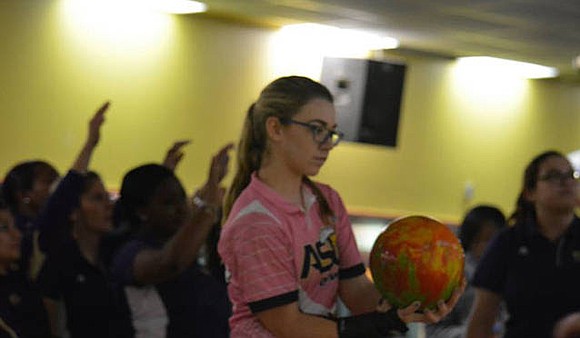 The Alabama State women's bowling team capped off its weekend with two wins to capture the Rattler Invitational title on Sunday.

PENSACOLA, Fla. – The Alabama State women's bowling team capped off its weekend with two wins to capture the Rattler Invitational title on Sunday.

The Lady Hornets opened the day with a 4-2 loss to No. 23 UAB, but bounced back with a 4-2 win over Louisiana Tech, sending Alabama State into the championship match and a rematch with UAB.

The Lady Hornets, who went 11-2 over the weekend, had two placed on the all-tournament team and three finished inside the top 10 individually.

Rebecca Hresko and Haley Young were named to the all-tournament team.

Hresko finished third individually with a 993 total pinfall and averaged a 198.6 in five team games. Young finished fifth (981 total pins) in five team matches with a 196.2. Jessica Sawmiller registered an eighth-place finish with a 191.4 average.

Nebraska would win the event, while Vanderbilt finished in second, and McKendree rounded out the top three.

All three schools will be in action again on Feb 10-12 in the Stephen F Austin Jacks Invitational.