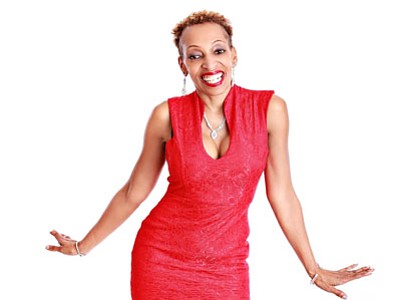 DaVeeda White was one of 10 winners of the Vistaprint Small Business Impact contest and was awarded $1000. The small business owners had to tell how they made an impact in the community. Courtesy Photo

Small business owners across the United States are making a difference every day, according to Vistaprint, the company that creates business cards, marketing materials, signage and other products in just minutes.

Company officials say in big cities and small towns, through one-on-one connections and large-scale community initiatives, many small businesses have discovered the value of buying local, sweeping the sidewalk, donating to a local charity— all of which can easily feel like just a regular part of the job.

So, when Vistaprint looked for ways to celebrate small businesses, they reached out to those whom community members said are making a difference with the customers they serve, the employees they mentor and the neighbors they inspire.

Daveeda White has plans to put the funds awarded to her to good use. She plans to purchase tote bags to give out to patients at the local hospitals. The bags are called "Grab your Tote & Go to Chemo," or any lengthy appointments where the items included with bags are very useful.

Baltimore’s DaVeeda White proved to be one of the many small business owners making a difference. White and thousands of other entrepreneurs from around the nation, entered the Vistaprint Small Business Impact contest for a chance to win a $1,000 that would help them to continue making a difference.

White was selected as one of 10 winners.

“Vistaprint has helped to grow three business ventures I have going on currently. The products and prices are incredible when trying to get projects going,” said White, founder and CEO of the nonprofit DaVeeda’s Quest 4 Quality Days (DQ4QD) and the owner of 2 Van Transportation Companies and a Travel Agency. “I visited Vistaprint’s booth at a conference recently in Washington, D.C., and made some good contacts. I love Vistaprint and will always be grateful for the value they put in small businesses.”

A Vistaprint spokeswoman said the company held the contest by asking small business owners to tell how they have made an impact in the community.

“Small businesses owners are making an impact all over the country, and DaVeeda’s story certainly stood out from the thousands of contest entries we received,” said Sara Nash, a company spokeswoman. “We were so inspired by her story and the impact she is making in her community. We hope her contest winnings can help further the impact she is already making.”

The award has already been put to good use, according to White.

“I already have plans to purchase tote bags to give out to patients at the local hospitals. I’ve been doing fundraising for the tote bags and items for six months so this is the blessing; I need to purchase everything I needed,” she said.

The bags are called Grab your Tote & Go to Chemo, or any lengthy appointments where the items could be used.

She said the tote bag initiative is was born out of a new partnership with Women’s Basketball Hall of Famer Marcia Richardson, who runs a basketball camp training youth to develop their natural talent in academics and athletics.

Currently camps are held in Northern California and in Virginia.

Born and raised in Baltimore, White graduated from Western High School and received an associate’s degree with a concentration in health from the Community College of Baltimore.

She went on to graduate from Sojourner-Douglas College before earning a bachelor’s of science degree from Coppin State University.

White has battled multiple sclerosis since 1999 and in 2013, she was diagnosed with breast cancer.

“The breast cancer diagnosis was just another challenge,” she said, noting that she draws strength from her mother, sisters and daughter as well as from the Bible. “I approach every challenge with the mindset that I can and will be triumphal. It’s this way because of the health challenges I’ve been faced with for over 15 years and still battling.”

This year, she even competed in the Ms. Entrepreneur/Ms.YoungPreneur Pageant 2017, a new pageant held in Maryland that encourages entrepreneurs to network and share business ideas.

“My interest for the pageant wasn’t for the typical beauty contest but actually your brains,” White said. “Having the entrepreneur component got me hooked. I am honored to represent Baltimore City because I am a product of the neighborhoods where many people aren’t afforded opportunities for growth or live below the poverty line.

“It’s important to see and actually know someone who grew up, received all of her education in the public-school system, and worked while starting businesses for the community,” she said.

For more information and for details other contest winners, visit www.vistaprint.com/hub/gma-small-business-week-2017.