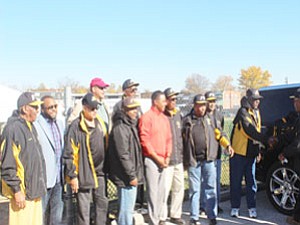 William Neal is optimistic about the future of the James Mosher Baseball League and the fields they have called home for more than a half-century.

In fact, as the league’s president, Neal is confident that things will work out just fine after some of baseball’s heavy hitters and BGE broke ground on a $1.2 million youth development park where hundreds of young Mosher League players have honed their skills.

“I just want it in writing,” Neal said. “Everyone seems to be willing to work with us and seem to acknowledge that we will maintain a presence on the field.”

It’s not every day that three Baltimore legends and Hall of Famers get together. But that’s what happened last fall in West Baltimore on a field behind James Mosher Elementary School.

The utilities company joined the Cal Ripken, Jr. Foundation in filling what they called a need for change within the Baltimore community with BGE developing a Youth Development Park to provide youth in the area with mentorship through sports and recreation.

“BGE supports initiatives that positively impact the community, especially the lives of young people, our most precious resource,” BGE Chief Executive Officer Calvin G. Butler Jr., said in a news release. “This park is a symbol of BGE’s commitment to the Baltimore region, and we are pleased to provide this legacy gift in our 200th anniversary year.”

Eddie Murray Field at BGE Park will feature a synthetic turf baseball diamond equipped with dugouts, a backstop, and a digital scoreboard. The field will be gifted to and maintained by the Baltimore City Public School system, according to officials.

Most importantly, it will not replace James Mosher’s famous name that has long been associated with youth baseball in Charm City, particularly for young African-Americans.

“I think the synthetic turf will be great for our kids as they grow and go on to high school and college where they may encounter that kind of turf,” Neal said.

Named after Mosher, a Revolutionary War Colonel and Baltimore native, the Mosher league’s roots go back to 1959 when a group of five men, Archie Lewis, Roland Ganges, Bernard Stokes, Sr., Alphonso Cottman, and Edward Watson, began to meet and exchange ideas concerning the social and personal problems of the youth in the City of Baltimore.

Mosher Baseball originally started as a six-team league in 1960 with 18 boys on each team. The league now includes 19 teams for boys and girls ages four to 15.

“Kids in our local communities need our help now more than ever, especially when it comes to finding a positive environment where they can play, learn and grow,” said Baltimore Orioles legend Cal Ripken Jr. “Because of our dedicated partners in BGE, we can provide the youth in West Baltimore with a safe place to simply be kids,” said Ripken, who was among the baseball stars to attend November’s groundbreaking ceremony.