Ravens have a big dilemma at tight end 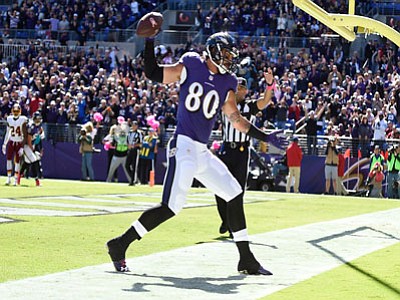 Baltimore Ravens tight end Crockett Gillmore spikes the ball after scoring a touchdown against the Washington Redskins in 2016. Courtesy Photo/NFL.com

The Baltimore Ravens will have an interesting road to travel when it comes to the tight end position. The team will be without Dennis Pitta, last year's team leader in receptions.

Pitta was Joe Flacco's favorite target as shown by his franchise record 86 receptions in 2016. He suffered his third hip injury, which will likely end his career.

The Ravens had a shortage at tight end heading into the 2016 season after Benjamin Watson tore his Achilles during the preseason. Watson had signed a two-year deal worth $7 million.

Watson agreed to a restructured his deal last month, which saved the team cap money. His base salary is $750,000 but has incentives that can escalate his earnings to a maximum of $3 million.

Rest assured, Watson will be looking to be a heavy contributor to activate the incentive and to position himself for another contract after the season. He will be in good shape if he can approach the 74 receptions he got in 2015 with the Saints.

The Ravens made an intriguing decision when 6-foot-6, 255-pound wide receiver Darren Waller was converted to tight end. The move was done as a result of Watson's injury.

Waller scored two touchdowns in 2016 and was a red zone target for the Ravens. The three-year, pro has been suspended without pay by the NFL for at least one year after violating the league's substance abuse policy for the second time in two years. He will be eligible to participate in the preseason.

This leaves the Ravens with Watson, Crockett Gillmore, Nick Boyle, Maxx Williams and Ryan Malleck as the team's tight ends.

Gillmore suffered multiple injuries since entering the NFL as a third-round draft pick (No. 99 overall) in 2014. He missed most of last season due to injury. If he can stay healthy, he should have an opportunity to contribute as both a pass catcher and blocking for the running game. Gillmore will be an unrestricted free agent after the season.

Boyle had a solid rookie season in 2015. He was a force as a blocker and showed that he could be a reliable short yardage target when given the opportunity. A 10-game suspension for performance enhancing drugs in 2016 didn't help his progression. It was the second suspension of Boyle's short career. He missed the final four games of his rookie season due to suspension as well.

While Boyle is under contract through next season, he has two suspensions in two years. His next suspension will cost him a full season. The Ravens cannot afford to rely on Boyle to be there for them.

Williams, a 2015 second-round draft pick (No. 55 overall), is questionable as well. He is working his way back from a knee injury on October that placed him on injured reserve, costing him most of the 2016 season. The injury required surgery.

Malleck is now with his third team since becoming an un-drafted free agent out of Virginia Tech in 2016. He originally signed with the New York Giants but was released via an injury settlement after a neck injury. The Pittsburgh Steelers picked him up in February but released him in May.

Every tight end on the Ravens roster has either been injured or suspended. This is not an ideal situation for a team working to get back to the days when they were a perennial playoff contender with a reliable tight end as an option for quarterback Joe Flacco.