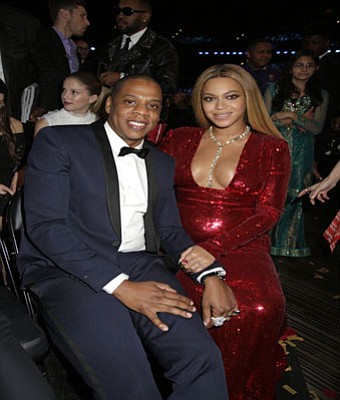 Not only does "4:44" contain lyrics that address the rumors of infidelity that BeyoncÃ©'s raised in her visual album "Lemonade," but according to Jay-Z's producer Queen Bey was directly involved. Pictured is Jay Z and Beyonce during the 59th annual Grammy Awards in Los Angeles, CA on Sunday, Feb. 12, 2017. CBS

We can thank Beyoncé for Jay-Z's new album in more ways than one.

Not only does "4:44" contain lyrics that address the rumors of infidelity that Beyoncé raised in her visual album "Lemonade," but, according to Jay-Z's producer, Queen Bey was directly involved.

"I always call Bey our de facto A&R," producer No I.D. told The New York Times in a Q&A published over the weekend. "Pillow talk is the strongest conversation on the planet. Every song has to get past her ears, in my eyes." A record label's A&R division is responsible for developing an artist once they're signed.

The producer, whose real name is Dion Wilson, said Beyoncé offered an assist in some cases.

"She came by a lot and played a good part in helping us get over hurdles on certain records," he told The Times. "Of course she's genius-level with that."

There's a reason it feels so timely

The Rev. Al Sharpton made headlines in June with a few gym selfies that caught the Internet's attention and spawned a thousand memes.

Jigga managed to include that social media phenomena in the song "Family Feud" less than two weeks before "4:44" dropped. How did he do that?

According to Wilson, the album was in production right up to the last minute.

"We did that maybe Monday?" the producer told The Times with a laugh. "Maybe Tuesday. I finished it Thursday morning."

The album dropped the following day.

Wilson said he asked the legendary rapper, "What do you listen to? Because I'll sample some of it" for the album.

"My philosophy was scoring his reality, his lifestyle and his taste," he said. "He kept adding songs into this playlist, so I made pieces of music out of all of it."

The power of truth

The album got its title from Jay waking up at 4:44 a.m. and calling his engineer, Guru, to record.

Wilson said he and the pair knew they didn't want to just craft an entire album of responses to Beyoncé's confessional "Lemonade," which touched on infidelity and marital hardship.

But Wilson said he was blown away by Jay-Z's raw honesty in the single "4:44" in which he apologizes to his wife and says "Took me too long for this song/I don't deserve you."

"I told him that's the best song he's ever written," Wilson told The Times. "Everything it covers about being a man, being in a relationship, being a father, how you affect your kids. These things don't really get touched on in music, especially in hip-hop."

Jay-Z agrees that "4:44" is special. The rapper told iHeartRadio's The Beat that it was "one of the best songs I've ever written."

On his grown man tip

Rap has always been known and discussed as a "young man's game."

But at 47, Jay-Z has delivered what many feel is his most personal and powerful project to date.

His producer said they asked themselves the question, "Has there been anyone in any genre that really tapped into themselves on a new level at that age?"

"It's really kind of unheard-of across the board, not just in rap," Wilson said. "But there are certain cheat codes that are available now -- you have streaming, and the ability to listen to everything that ever happened. We could gauge: Why does Adele do this? Why did Led Zeppelin do this? Why did Jimi Hendrix do this? What are the common threads? Honesty, vulnerability, pain -- these are things that always supersede the trends of the day."

It appears to have paid off.

According to Apptopia, which tracks app trends, Tidal's exclusive streaming of "4:44" helped boost the music streaming app to No. 1 in Apple's App Store for the first time since Valentine's Day 2016, when Kanye West's "The Life of Pablo" was released on the app exclusively.