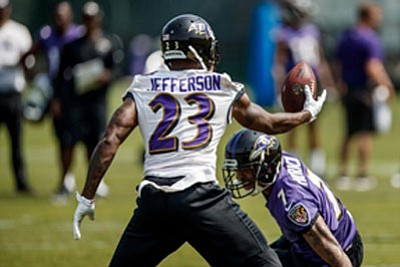 The Baltimore Ravens were looking to get younger at safety during the offseason. Eric Weddle, the big free agent signing in 2016 proved to be a solid acquisition with his team-leading four interceptions.

Free agent safety Tony Jefferson is the latest addition to Baltimore's secondary. Jefferson's in the box style of play will allow Weddle to use his range and centerfield for the Ravens.

Going to a new environment is not always a smooth process for a veteran player. However, it's been seamless for Jefferson.

"The whole process of being undrafted and getting that reward felt really good. It's been an easy adjustment," Jefferson said on NFL Network on Monday. “When you're surrounded by a bunch of guys in the locker room, guys that Harbaugh and Ozzie put together, it makes the transition easy. Guys like Eric Weddle, he'll make me a better football player."

Ravens defensive coordinator Dean Pees did an outstanding job with the defense last season. Baltimore was the top defense in the NFL for 12 of the 16 games last year. He did an excellent job of creating pressure on the quarterback through blitzing and stunts up front. As always, the Ravens were also stout against the run also. They finished fifth in the league, giving up 89.4 rushing yards per game in 2016.

Jefferson was used primarily in the box when he was with the Arizona Cardinals. He posted 96 tackles and two sacks for Arizona last season. The Cardinals scheme is similar to what Pees does in Baltimore because they pressure the quarterback with blitzes that include sending safeties.

Having the opportunity to play in such a scheme appeals to Jefferson, and is one of the reasons he turned down more money from other teams in favor of coming to Baltimore.

"I get really pumped up and excited when I talk about the scheme that I've seen so far, and the ways they're going to use me. I am going to be able to make a bunch of plays in this defense," Jefferson said. "Dean [Pees] loves to bring pressure. That's what Arizona did. I am used to that."

Before signing with the Ravens, Jefferson did his own research on the team. He is looking forward to taking the field with some of the outstanding players on the team.

"I feel like this style fits me. I personally went to NFL Game Pass and watched the film before I made a decision," Jefferson explained. "This defense fits me. The possibility of teaming up with Weddle, C.J. Mosely, our linebacker— this style fits me, I love to hit, and that's the culture here. That's what I want to be a part of."