Half of those with Hepatitis C in Baltimore don’t know they have it! 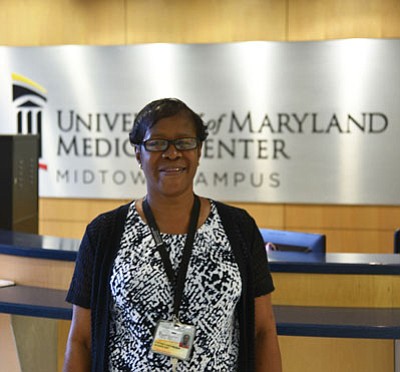 Hepatitis C is a major factor in the life of 57-year-old Cynthia Richardson.

“I was an IV drug user and shared needles,” she said. “I used to go to a clinic for routine testing. One day in 1994, they found I had hepatitis C.”

Despite the test results, it took Richardson a while to get her life together.

“I stopped drinking and drugging, and I’ve been clean for 14 years,” she said.

Hepatitis C, a virus known as HCV, is curable with pills, and new medicines are on the way. Despite the cure, HCV accounts for 30 percent of liver transplants in the United States and can lead to fatal liver disease.

One of the big issues with HCV is how easily it can spread through blood or blood products.

That reality has made Richardson, a peer educator and navigator at the University of Maryland Medical Center Midtown Campus, a strong advocate for hepatitis C testing, providing support and education and assisting newly diagnosed Hep C patients and those who dropped out of treatment get back into care.

In many ways, Richardson sees her own risky behavior mirrored in the people she tries to help each day. The risk-taking contributes to what she calls an epidemic of Hep C, intertwined with escalating drug abuse in and around Baltimore. Most troubling is the rising tide of opioid overdoses. If not outright deadly, the overdoses suggest habits that can lead to HCV infection.

“You know they’re sharing needles. And with that comes the risk that Hep C will keep spreading,” she said.

The free testing, sponsored by UMMC Community Outreach and the JACQUES Initiative at the University of Maryland School of Medicine’s Institute of Human Virology, is part of World Hepatitis Day, to raise awareness about what the hepatitis virus is, what it can do to the liver and how it’s spread and treated.

The most common blood-borne virus, HCV is a contagious disease usually spread when an infected person's blood enters the body of someone not infected, primarily affecting the liver.

“About half of those with HCV don’t know they have it, meaning they can spread the virus without intending to, so it’s important to get tested and protect yourself by not sharing razors or needles and practicing safe sex,” said Eleanor Wilson, MD, MHS, assistant professor of medicine at the University of Maryland School of Medicine’s Institute of Human Virology.

HCV can be acute— a short-term viral infection that spontaneously clears within six months. But people with what's known as chronic HCV can live for decades without symptoms. Chronic HCV is the leading cause of cirrhosis (scar tissue that replaces normal liver tissue) and liver cancer.

“If we can identify and treat the HCV cases aggressively, then we can reduce the progression to cirrhosis and liver cancer, and the need for liver transplantation,” said liver disease specialist William R. Hutson, MD, professor of medicine at the University of Maryland School of Medicine and medical director of liver transplantation at the University of Maryland Medical Center.

Several groups of people are key targets for HCV testing: “Baby boomers” born between 1945 and 1965, anyone with a history of intravenous drug use, anyone who had a transfusion of blood products before 1992, and individuals who had tattoos done outside of a professionally licensed business.

After living with HCV for many years without symptoms, Richardson has begun taking a medication that can cure the disease.

“Hepatitis C will keep spreading if people don’t get tested for it. Some people are afraid of finding out, or afraid their partner may reject them. But Hep C can be deadly, so why not be tested, especially when it can be cured,” Richardson said.