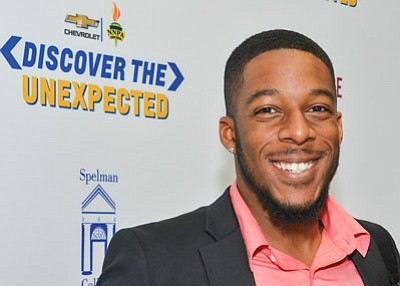 National Newspaper Publishers Association’s “Discover the Unexpected” Journalism Fellow Darrell Williams is a drama major with a minor in cinematography at Morehouse College with dreams of being a creative director, one day. Freddie Allen/AMG/NNPA

Darrell Williams is a rising senior at Morehouse College, who has big dreams of being a creative director, one day.

At Morehouse, Williams is a drama major with a minor in cinematography.

Williams was born and raised in Landover, Md., and is the oldest of his siblings; his younger sister, T'Keyah, is 22-years-old and his younger brother, Rashad, is 12-years-old.

"I was the first in my family to pursue a career in business administration, but my life changed after I received mentoring,” said Williams. “I was inspired to pursue my passion in acting, dancing and creative directing."

Williams’ didn’t take a straight and narrow path to Morehouse.

Williams is now a man of Kappa Alpha Psi Fraternity Incorporated and he is more determined to help others and pursue his passion.

"I pledged to Kappa Alpha Psi Fraternity, because I believe in the organization’s values. The mission, values and morals that the Kappa's live by are impeccable,” said Williams. “Being a part of Kappa Alpha Psi, I learned that man must know thyself and, no matter what, you have to keep moving forward and that you can’t make any excuses.”

Williams also learned that he has to stand strong in who he is. Networking opportunities are another benefit of becoming a Kappa.

The Maryland native said that two of his biggest accomplishments, so far, have been getting a scholarship to attend Morehouse and joining Kappa Alpha Psi Fraternity.

Williams said that he is optimistic about his future and appreciative of all of the opportunities that come his way.

Before the NNPA/DTU Journalism Fellowship, Williams said that he didn’t know much about the Black Press, but he looks forward to learning more. Williams is excited for his future and about the chance to enrich his journalism skills this summer at The Louisiana Weekly.

"I hope to learn all that I could possible learn about the Black Press and the NNPA, this summer,” said Williams. “I desire to become a stronger writer and storyteller. I know that I need improvements in some areas, but I am open to constructive criticism and I am eager to learn more.”

Williams continued: “I know that the NNPA fellowship can help me with my journalism skills. The opportunity to intern with The Louisiana Weekly was a needed experience. I do not take NNPA/DTU fellowship lightly.”

Tiana Hunt is a 2017 NNPA “Discover The Unexpected” Journalism Fellow and a recent graduate of Clark Atlanta University. This summer, Tiana is writing for The Louisiana Weekly, a member newspaper of the NNPA. Follow Tiana on Twitter @TianaTaughtYa.