Ravens have a full stable of running backs 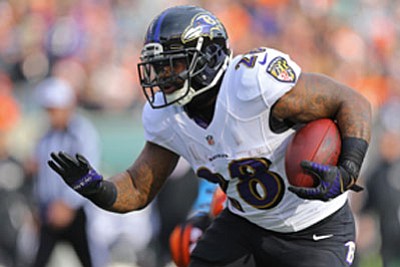 The Baltimore Ravens have been trying to find a way to repeat the success they enjoyed running the ball in 2014 with Gary Kubiak as their offensive coordinator. They averaged 126.2 yards per game and ended up with 2,019 yards rushing in the season.

Justin Forsett led the team with 1,266 rushing yards and was was fifth in the NFL. Forsett is long gone, and now Baltimore is employing a committee approach to their running back situation.

Ravens head coach John Harbaugh had high praise for his group of backs supplemented by the addition of free agent Danny Woodhead.

“Terrance West has done really well. He has looked good in practice. I also think that Kenneth Dixon has looked really good. Danny Woodhead has looked good at practice," Harbaugh explained after a minicamp practice. "Lorenzo [Taliaferro] has done a good job. So, I feel really good. [Javorius] ‘Buck’ [Allen] has done a really good job. ‘Buck’ has been very quick and explosive, so I feel good about all of those guys. But definitely, Terrance, I think he worked really hard in the offseason, and he has improved.”

Terrance West will likely get the bulk of the carries. He came back in really good shape, which was noted by Harbaugh. The former Towson running back gained 774 yards last season and scored five touchdowns.

Second-year running back Kenneth Dixon is also an intriguing option. He is capable of running the ball inside, and has the speed to get outside and turn the corner.

Woodhead gives Baltimore a player who can gain chunks of yards in a hurry. He presents a serious matchup problem for opposing defenses. The Ravens can line him up in the backfield and motion him to the slot or outside to force linebackers to walk out and have to cover him.

That is a mismatch that quarterback Joe Flacco will be able to take advantage of. Woodhead is also a dangerous player in the screen passing game.

At 5-foot-8, 200 pounds, Woodhead is the lightning component to go along with the power running style from West, a 5-foot-11, 225-pound back. He'll be an effective change of pace for Baltimore.

Then there is Javorius 'Buck' Allen, a slashing running back that has the vision to see a cutback lane and get there to gain extra yards. He has been relatively underused over the last season after seeing plenty of action in 2015.

Allen was frustrated about being inactive often last season. He checked into OTAs hoping to get a fresh start. How his role is defined remains to be seen. Nevertheless, he is a talented back that can catch the ball out of the backfield as well as handle a heavy workload in the rushing attack.

Having lost fullback Kyle Juszczyk to the San Francisco 49ers via free agency, the Ravens now have to find his replacement. Juszczyk's departure turned out to be perfect timing for Lorenzo Taliaferro.

At 6-foot-0, 225 pounds, Taliaferro is smaller than Juszczyk (6-foot-1 and 240 pounds), but he has inherited the fullback role for Baltimore. It will take some time to get acclimated to being the lead blocker and doing the things that a fullback is asked to do, but Taliaferro is up for the task if it means staying on the Ravens roster.

The objective is to pound the football and work the play action passing game to take advantage of Flacco's throwing power. If they can do so, Baltimore will once again be a threat to make the playoffs.